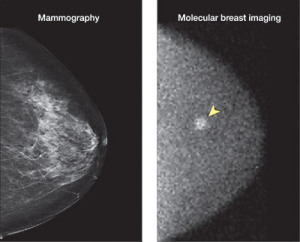 Photo credit: Carrie B. Hruska, PhD,
Mayo Clinic
Although mammography is the gold standard for breast cancer screening, it falls short in detecting lesions in women with dense breasts.

The emerging technology of molecular breast imaging is hoping to become the first nuclear-based alternative to the modality -- and its capabilities are promising.

For the study, women with heterogeneously dense or extremely dense breasts as revealed by previous mammograms were screened using digital mammography between June 2010 and January 2011. All of the women also underwent an MBI scan. The mammograms and MBIs were read by two different radiologists.

In the 440 women studied, six cancers were found in six patients. While mammography missed all of the cancers, MBI found the lesions in five out of six patients, or 83 percent. (The last cancer was detected on prophylactic mastectomy.)

"Although the study is ongoing, findings from this interim analysis indicate that low-dose MBI can be a useful adjunct and potential alternative to screening mammography in women with dense breasts," reads a release on the study's results.

To establish true sensitivity and specificity, the women studied will need follow-up mammograms at one year and further study of the MBI scans.

The MBI trial has enrolled 2,400 women so far and is being carried out by the Mayo Clinic in Rochester, Minn. The institution has been conducting molecular breast imaging research for the past decade.

In a 2008 study, Mayo Clinic researchers found that MBI detects three times as many cancers in women with who have dense breasts and are at a higher risk of cancer than mammography.

The institution licensed the commercialization of its device to Northridge, Calif.-based Gamma Medica. In 2009, the company received Food and Drug Administration approval for the digital Dual-Head LumaGEMT MBI System.

During an MBI scan, a woman is injected with technetium-99m, which is absorbed by the breast tissue. It's then tracked by dual-head gamma cameras for breast imaging, which use cadmium zinc telluride detectors.

Although MBI has been shown to be an effective secondary diagnostic tool for women with dense breasts, the device still delivers a dose of radiation, a major concern in the imaging community.

Currently, the LumaGEMT MBI system uses a dose of 8mCi for secondary diagnostic workups for patients but the Mayo Clinic and Gamma Medica have been working on a system that uses a lower dose.

Thanks to a redesign of the breast-specific collimators and other enhancements in the technology, it's now possible to perform an MBI scan using a dose of 4mCi, similar to the exposure delivered by a digital mammography system, according to the release.

But what about cost? An MBI scan is more expensive than a mammography exam but it's about one-fifth of the cost of a breast MRI, according to the Mayo Clinic.

The average reimbursement for the LumaGEM MBI scan ranges between $200 and $700, according to the company's website.

Mayo Clinic's clinical trial is being funded by a grant from the Susan G. Komen Foundation.