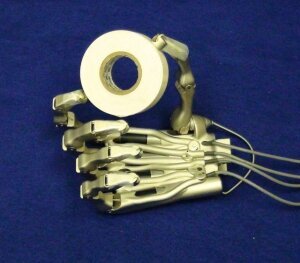 On Jan. 12, 2007, a roadside bomb, the weapon of choice among Iraqi insurgents, blew off the legs of a 24-year-old corporal. After being treated in a military hospital in Landstuhl, Germany, he was flown to the Andrews Air Force Base near Washington, D.C. and then transported to the Walter Reed Army Medical Center.

The following week, Time Magazine deemed the corporal’s arrival home “a grim milestone” of the Iraq war – he was the conflict’s 500th major amputee.

Thanks to improvements to body armor equipment and military transport, the casualty rate of the Iraq and Afghanistan conflicts is relatively low, but the number of soldiers coming back with major and partial amputations is still painfully high. According to a 2010 Congressional Research Service report, 1,621 military personnel lost a limb as a result of serving in Operation Iraqi Freedom, Operation Enduring Freedom and other conflicts between the Septembers of 2001 and 2010. Many of the soldiers return home with life-changing injuries that complicate the process of resuming the lives they led as civilians.

Fortunately, the field of prosthetics is evolving with the needs of returning veterans. Manufacturers are rolling out cutting-edge devices and researchers are working on technology that not only comes close to the look of a biological limb, but also strives to offer the feeling of one.

A bionic foot, now available
Last February, Randall Tipton, a veteran who served in both Iraq and Afghanistan, was fitted with the iWalk PowerFoot BiOM at the Michael E. DeBakey VA Medical Center in Houston, Texas. The prosthesis is the world’s first bionic lower leg system that replaces the action of the foot, Achilles tendon and calf muscle, providing a nearly perfect gait to amputees, according to the U.S. Department of Veteran Affairs.

The BiOM was invented by Hugh Herr, director of biomechatronics with the Massachusetts Institute of Technology. The Telemedicine and Advanced Technology Research Center and the Department of Defense injected initial funding into the multi-million-dollar product development.

Herr knows what it’s like to lose a limb – both of his legs were amputated below the knee when he was 17 due to a climbing accident. Before developing the BiOM through iWalk, his Cambridge, Mass.-based company, Herr invented the Rheo knee. (It’s now a product in Össur’s portfolio, a leading prosthetics company headquartered in Reykjavik, Iceland.)
1(current)
2
3
4
5
6
7