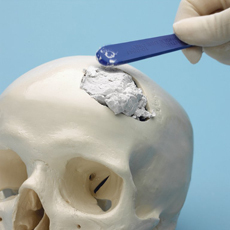 Norian bone cement.
(Photo couresty
Synthes Inc.)
Synthes, Inc. of West Chester, Pa. and its wholly-owned subsidiary Norian Corporation have pleaded guilty to charges related to the companies' involvement in conducting clinical trials of a medical device without the authorization of the U.S. Food and Drug Administration.

The companies will pay the maximum criminal monetary penalties of $22.5 million from Norian and $669,800 in fines and forfeiture from Synthes.

Synthes specializes in products to treat damaged human bones. Norian manufactures osteobiologic medical devices. The case is in the Eastern District of Pennsylvania.

According to the publicly available superseding criminal information in the case, Norian is accused of conspiring with Synthes in conducting unauthorized clinical trials of Synthes' devices Norian XR and Norian SRS, to treat vertebral compression fractures (VTFs). The FDA had not cleared the use of the devices for that treatment, and had warned against the treatment in its label. Medical concerns already existed over how the bone cement reacted to human blood through clotting. Nonetheless, the companies still allegedly marketed Norian SRS/XR for VTFs without the required FDA testing, including promoting a recipe for mixing SRS with barium sulfate, in what's known as "back-table mixing."

The information states that three patients died on the operating table, after which the companies stopped marketing the product. However, Norian and Synthes allegedly did not recall the product, which would necessitate detailing the patients' deaths to the FDA, but instead covered up the situation, including making false statements to the FDA.

The FDA said that the resolution of the case includes a civil settlement under the False Claims Act totaling $138,000 for the submission of thirty-one false claims to various federal health care programs.