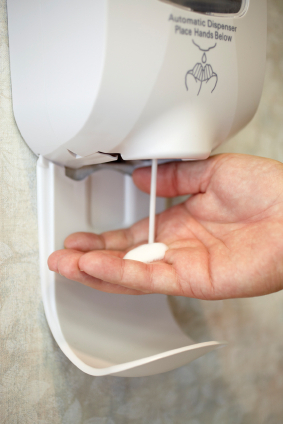 Hand hygiene
lacking in ACSs
Two-thirds of ambulatory surgical centers (ASCs) surveyed in three states were found to have lapses in infection control procedures, including hand hygiene, injection and medication safety, and equipment processing, according to an article published Tuesday in the Journal of the American Medical Association.

The Centers for Medicare and Medicaid-certified ASCs surveyed were volunteers from Maryland, North Carolina and Oklahoma, defined as facilities that operate exclusively to provide surgical services to patients who do not require hospitalization or stays in a surgical facility for more than 24 hours. There are more than 5,000 ASCs participating in the Medicare program.

The joint study between CMS and CDC found that 67 percent of the centers had at least one lapse in infection control, and 17.6 percent had lapses in three or more of the five infection control categories.

"I'm disappointed by these results," said Dr. Melissa Schaefer of the CDC's health care quality promotion division. She also pointed out that since this study is the first of its kind, there are no numbers for comparison.

"In the past surveillance for infection control, there wasn't a really systematic or standardized way to assess practices," Schaefer told DOTmed News. Inspections did not previously require observation of procedures. We felt this tool, which was novel in this study, really helped draw surveyors' attention to basic, key expectations of infection control."

Facilities were assessed between June 2008 and October 2008. Schaefer said the areas of concern were lapses in hand hygiene, reuse of single-use medication vials and reuse of blood glucose monitoring equipment.

Surveyors found 19.4 percent of facilities had a lapse in adherence to hand hygiene or appropriate use of personal protective equipment, like gloves. Additionally, 28.4 percent failed to adhere to policies regarding injection practices related to single-dose vials, and 46.3 percent had lapses in appropriate handling of equipment used for blood glucose monitoring.

In May 2009, in efforts to increase attention to infection control in ASCs, CMS updated several health and safety standards, including requirements that CMS-certified ASCs maintain infection control programs based on national guidelines and that these programs be directed by a designated professional who has training in infection control, according to the report. Additionally, in October 2009, CMS incorporated the CDC audit tool into all of its ASC infection control inspections. Currently, CMS is inspecting one-third of its ASCs across the country as recommended by the U.S. Government Accountability Office.

Instead of a state survey, there are also four CMS-approved accreditation programs that can determine whether ASCs comply with CMS conditions for coverage, said CMS's Peter Ashkenaz. Centers' standards for infection control must meet or exceed Medicaid standards, he said in an e-mail to DOTmed News.

"I want to emphasize the important role that these three pilot states played," she said. "We wouldn't have been able to do this survey otherwise...I'm disappointed regarding infection control practices, but I'm really hopeful that these findings, along with efforts collaborated by the CDC and CMS, move forward in patient safety."