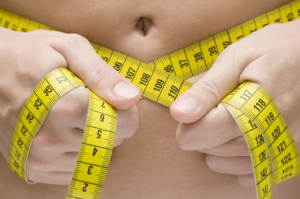 Visceral fat presents
cardiovascular risks
A study by researchers at Rush University Medical Center, published in advance online in the medical journal Obesity, showed that an increase in visceral fat during menopause is linked with testosterone. The study included 359 women in menopausal transition, ages 42 to 60, about half black and half white. Fat in the abdominal cavity was measured with CT scans, a more precise measurement than waist size. Blood tests were used to assess levels of testosterone and estradiol (the main form of estrogen). Medical histories covered other health factors possibly linked with an increase in visceral fat or belly fat, which is a significant risk factor for cardiovascular disease in menopausal women. Researchers wanted to know what this visceral fat accumulates.

Rush University Medical Center researchers found that age was less likely to be a contributor, rather the change in hormone balance that occurs during menopause transition is the cause.

"Of all the factors we analyzed that could possibly account for the increase in visceral fat during this period in a woman's lifetime, levels of active testosterone proved to be the one most closely linked with abdominal fat," said Imke Janssen, Ph.D., assistant professor of preventive medicine and the study's lead investigator.

Statistical analyses showed that the level of "bioavailable" testosterone, or testosterone that is active in the body, was the strongest predictor of visceral fat.

A woman's age did not correlate significantly with the amount of visceral fat. Nor did race or other cardiovascular risk factors.

The level of estradiol also bore little relationship to the amount of visceral fat.

Visceral fat, surrounding internal organs around the waistline, is metabolically different from subcutaneous fat, which is fat located beneath the skin. Research has shown that visceral fat is a source of inflammation that contributes to premature atherosclerosis and risk of acute coronary syndrome.

The study's findings extend earlier research conducted by Janssen on testosterone's link with what is called the metabolic syndrome during the menopausal transition, published in the Archives of Internal Medicine in 2008. That study, examining women six years before and six years after their final menstrual period, found that the rise in metabolic syndrome - a collection of risk factors for heart disease - corresponded with the rise in testosterone activity.

Other researchers at Rush involved in the study were Lynda Powell, Ph.D., Dr. Rasa Kazlauskaite and Dr. Sheila Dugan.

The study was funded by the National Institutes of Health and the Charles J. and Margaret Roberts Trust.