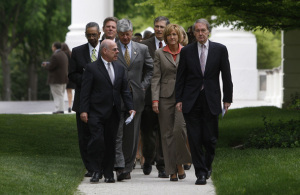 Blue Dog agreement was
adopted late Friday, July 31,
as an amendment offered
by Rep. Mike Ross (D-Ark.)
The House Energy and Commerce Committee met throughout the day on Friday to mark up H.R. 3200, the American Affordable Health Choices Act of 2009. The bill was approved by a vote of 31 to 28, with five Democrats voting against it.

The long anticipated Blue Dog agreement was adopted late Friday, July 31 as an amendment offered by Rep. Mike Ross (D-Ark.). Highlights of that agreement include:

* Public Plan Option: Requires the Secretary of Health and Human Services (HHS) to negotiate payment rates in the public plan, so that they would not be lower than Medicare or higher than the average rates paid by private plans in the Health Insurance Exchange. Requirements for physicians and other providers to opt-out of participating in the public plan are specified.
* CO-OP: Establishes a Consumer Operated and Oriented Plan (CO-OP) program, through which grants and loans will be made for the creation and initial operation of not-for-profit, member-run health insurance co-ops that provide insurance through the exchange.
* Subsidies and mandates: Those who are offered insurance by their employers would be ineligible for subsidies (affordability credits) in the exchange unless their premiums equal more than 12 percent of their income. More small businesses would be exempt from the pay-or-play mandate.
* Medicaid: Reduces federal responsibility payments (FMAP) for required Medicaid expansions from 100 percent to 90 percent beginning in 2015.
* End-of-life planning: Provides for dissemination of information on end-of-life planning by qualified health benefits plan (QHBP) entities, including option to establish advanced directives and physicians' orders for life-sustaining treatment. Specifies that the QHBP entity shall not promote suicide, assisted suicide or the active hastening of death (consistent with state law) and that the information shall not presume the withdrawal of treatment. Prohibits promotion of assisted suicide.
* Center for Medicare and Medicaid Payment Innovation: A Center for Medicare and Medicaid Payment Innovation would be established to test the effect of payment models on spending and quality of life under the Medicare and Medicaid programs. The Secretary may implement the model on a nationwide basis if it improves quality without increasing spending and/or reduces spending without reducing quality.

Descriptions of some of the other amendments and details of interest that were considered:

* Public health plan: Rep. Cliff Stearns (R-Fla.) successfully offered an amendment that would prohibit taxpayer bailouts to subsidize the public plan. An amendment offered by Rep. George Radanovich (R-Calif.) that would have required the public plan to be subject to state taxes and other requirements was defeated. An amendment by Rep. Joe Barton (R-Tex.) was rejected that would have, in lieu of a public health insurance option, expanded state reinsurance programs and state high risk pool programs for those with pre-existing or other high risk conditions, and an amendment by Anthony Weiner (D-N.Y.) was withdrawn that would have established a single payer health care system.
1(current)
2
3
4