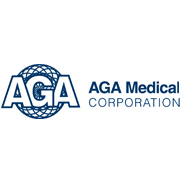 AGA is a leading developer of interventional devices for the minimally invasive treatment of cardiovascular defects and peripheral vascular disease.

AGA intends to appeal the decision that Occlutech did not infringe upon its patent. In January 2009, the German court of appeals in Dusseldorf enjoined Occlutech from infringing on the German part of AGA's European patent (EP 0 808 138). Occlutech is based in Jena, Germany.

John Barr, president and chief executive officer of AGA confirmed that the U.K. court decision affirms the validity of AGA's patent, while falling short of determining that Occlutech products infringe on its intellectual property. "The patent at issue is only one of a number of patents that our company holds, and we will doggedly protect them against Occlutech and other companies as necessary," said Barr.

AGA Medical Holdings, Inc., based in Plymouth, Minnesota, is a leader in developing interventional devices for the minimally invasive treatment of cardiovascular defects and peripheral vascular disease. Founded in 1995 by Dr. Kurt Amplatz, a former professor and researcher at the University of Minnesota Department of Radiology, AGA Medical develops and commercializes devices for a range of structural heart repair and circulatory conditions. Several of these devices have been major innovations in the treatment of the most common congenital "holes in the heart," such as atrial septal defects and patent foramen ovales.

More than 700 articles have been published in medical literature that support the benefits of AGA Medical devices, including improved patient outcomes, reduced length of stay and accelerated recovery times for the patient. AGA Medical devices have received regulatory approval and are marketed in 101 countries. For more information, visit www.amplatzer.com.