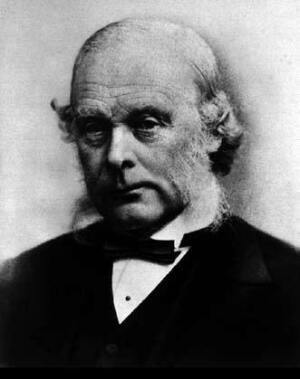 For individuals unfortunate enough to undergo a surgical procedure prior to 1860, there was approximately a 50% chance of dying shortly afterward due to infection or illness. However, if for those lucky enough to be one of Dr. Joseph Lister's patients after August 12th, 1865, chances of survival - during and after - were much higher.

Prior to Lister survival rates for procedures, like amputations, were a mere one-to-two percent. Surgical attire wasn't anything like it is today; surgeons didn't wear scrubs or gloves, nor did they cover their mouths and hair. In fact, infection (thought to be the result of "bad air"), turned out to be from bacteria from the surgeon's hands, clothes, breath and hair. In addition, spectators were often allowed to observe operations firsthand, potentially exposing patients to more bacteria.

At the same time, the French chemist Louis Pasteur was experimenting with the fermentation and rotting that occurs without oxygen when microorganisms are present and the possible solutions of such occurrences. After reading Pasteur's studies, Lister decided to apply Pasteur's findings to his own profession. Since Pasteur's first two suggestions for possible solutions, filters and heating, were unsuitable for surgical procedures, Lister tried Pasteur's third method, chemical solutions.

Lister had known that carbolic acid, or phenol, had been used as a railway track preserver, was effective in treating/disinfecting sewage and was known for ridding livestock of parasites. Thus, Lister experimented and found that the application of carbolic acid solution to instruments before use, the surgical incision itself and the surgical dressing used to cover the incision, dramatically reduced incidences of gangrene and other such infections. Through this method, he was able to keep the Glasgow hospital ward free of infection for nine months.

In addition to applying antiseptic solutions to tools and supplies used during surgery, Joseph Lister, with the concurrence of Louis Pasteur, encouraged surgeons to observe personal hygiene by washing their hands prior to performing surgeries. After some ridicule and incredulous hesitance, hospitals and doctors slowly began putting Lister's suggested sterile procedures to use.

Following his experimentations, Lister wrote a string of articles on his findings including Antiseptic Principle of the Practice of Surgery, describing his experiments and procedures in the 90th volume of The Lancet, a peer-reviewed general medical journal. The success of Lister's experiments with carbolic acid drew international attention and by 1869 his lectures drew audiences of over 400.
1(current)
2