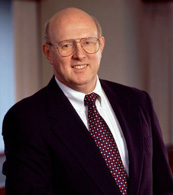 In a statement Tobin said that is was an appropriate time to turn over leadership to Ray Elliott. Tobin believes that Elliott is an outstanding choice and the transition will go smoothly.

Elliott, 59, has more than 35 years of experience leading health care and consumer products companies. He led the orthopedics company Zimmer Holdings Inc. for 10 years, joining the company as President and rising to become Chairman, President and CEO. Prior to joining Zimmer, he served as President and CEO of Cybex International Inc., a medical rehabilitation and cardiovascular products company. He has also served as President and Chairman of various divisions of Southam Inc., a communications group, and as Group President of the food and beverage company John Labatt Ltd. He began his career in the health care industry with American Hospital Supply Corp. - now Baxter International Inc. - where he served for 15 years in sales, marketing, operations, business development and general management positions, leading to his appointment as President of the Far East divisions, based in Tokyo. He has also served on a number of boards, including AdvaMed, where he was chair of its orthopedics sector. He was a member of the Boston Scientific board of directors from 2007 until earlier this year. In addition to serving as President and CEO of Boston Scientific, he will rejoin the board. He holds a bachelor's degree from the University of Western Ontario, Canada.

Boston Scientific is a worldwide developer, manufacturer and marketer of medical devices whose products are used in a broad range of interventional medical specialties. For more information, please visit: www.bostonscientific.com.