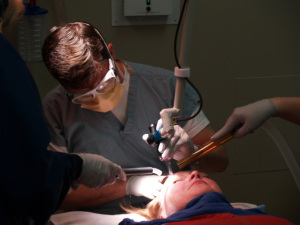 A laser skin treatment
with fewer problems
and better results
When she looked in the mirror, 48 year-old Margaret Miglia didn't like what she saw. To combat the fine lines and brown spots that began to appear on her face with age, she sought help at the University of Michigan Cosmetic Dermatology and Laser Center where she received a new, non-surgical skin resurfacing treatment using a fractionated carbon dioxide laser.

"Previous laser treatment for wrinkles and other textural issues like acne scarring used to create significant wounding," says Jeffrey Orringer, M.D., director of the U-M Cosmetic Dermatology and Laser Center. "While results were terrific, the downtime for patients was substantial, and the risks were significant. Then, as technology improved, the pendulum swung the other way, providing lower risks, but with less pronounced results. This new treatment offers both improved results with much fewer side effects."

In developing this new treatment method, traditional carbon dioxide lasers were modified into a fractional format. The carbon laser beam is broken into numerous microscopically thin beams that strike the skin and vaporize sun damaged or scarred tissue. This causes the skin to tighten, and during healing, produce collagen -- the protein responsible for skin structure and appearance.

"The little micro-beams essentially vaporize small columns of tissue that take about two to three days to seal back up," Orringer says. "During that time, as the skin heals back together, the lost volume essentially creates a tightening of the skin. In addition, around those columns of skin where the beam delivers heat, a very reproducible wound healing mechanism is created, which leads in part to the formation of new collagen in the skin."

In addition to smoothing fine lines and wrinkles, Orringer says patients who undergo fractionated carbon dioxide laser treatment can expect a more even skin tone, as well as results that last for years, not weeks or months.

"Collagen, the molecule that this procedure is really trying to get the body to produce, has a half life of about 15 years. We would expect that, to the extent that patients' improvement is based on collagen production, their results would last a very long time," he says.

Fractionated CO2 lasers made by various manufacturers are commercially
available, but clinicians performing these treatments require specialized
training, Dr. Orringer tells DOTmed News. "Cost varies based on the area (face, neck, etc.) to be treated and the technique used," he says. Most treatments run from roughly $1,800 to $,3500 and they're more expensive on the coasts.
1(current)
2
3