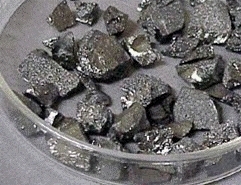 Boron--one of science's
best-kept secrets
European Science Foundation Researchers are on the verge of unleashing the power of the element boron in a new generation of drugs and therapies, as decades of research begins to bear fruit. Boron has to date been one of biology's best kept secrets, but is now attracting fast-growing research interest and investment from the pharmaceutical industry in the quest for novel drugs to tackle cancer and infectious diseases, potentially overcoming limitations and side effects of current products.

Europe's response to the challenges and opportunities of boron chemistry in medicine was discussed at a recent workshop, Biobor - Exploring New Opportunities Of Boron Chemistry Towards Medicine.

According to its spokesman, Zbigniew Lesnikowski, the European Science Foundation workshop set the stage for a new era of boron therapies going beyond the current application in cancer radiotherapy via boron neutron capture therapy (BNCT), in which the element is used to help translate beams of neutrons into radiation that targets tumor cells with less "collateral damage" of surrounding healthy tissue.

"It became obvious during the workshop that there is now sufficient knowledge and enough compounds to support a broad program of screening in the quest for new antiviral and anticancer drugs containing essential boron components," said Lesnikowski. There was also scope for improving the application of BNCT to cancer, but besides these two therapeutic avenues, boron also has vast potential as the basis for compounds in diagnosis and biosensing, and also for novel bioorganic materials, said Lesnikowski.

The applications in bio sensing, biomaterials, and drug development all spring from the fundamental chemical properties of boron. All life is derived ultimately from the element carbon, which lies next to boron in the periodic table of elements, their respective atomic numbers being six and five. Boron compounds share some similarities with carbon but also have important differences. It is the combination of these similarities and differences that give boron its unique potential in medicine.

The important similarity is that boron, like carbon, combines with hydrogen to form stable compounds that can participate in biochemical reactions and syntheses. The key difference is that these compounds have distinctive geometrical shapes and electronic charge distributions with greater 3D complexity than their carbon based equivalents. As Lesnikowski put it, while organic carbon molecules tend to comprise rings and chains, boron hydrides (compounds comprising mostly boron and hydrogen) are made up of clusters and cages. This 3D structure makes it possible to design molecules with specific charge distributions by varying their internal structure, and this in turn brings the potential to tune how each part of the structure relates to water molecules and biomolecules present in living organisms.
1(current)
2