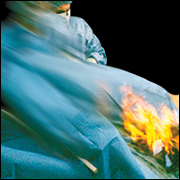 ECRI Institute and IAHSS host
a webinar on hospital fire
prevention Oct. 15
Operating room fires are making the news in part because a family is suing ConMed Corp., the maker of an electrosurgical unit that allegedly burned their son during a tonsillectomy. A court date is set in October.

ConMed and industry observers say that the electrosurgical unit was not solely to blame for the fire. ConMed said in a statement that, "this incident was investigated both by the California Department of Public Health and by the hospital where the event occurred and ConMed's equipment was found not defective. ConMed is defending itself vigorously in the lawsuit."

A Larger Issue for the Medical Device Industry

The case calls attention to the dangers of fires in OR where medical gases and electrical equipment are in hazardous proximity.

Commenting on OR fires in general, and not the ConMed case specifically, Mark E. Bruley, vice president for accident and forensic investigation for the ECRI Institute, an industry watchdog, told DOTmed News that "by their very nature, electrosurgical units make electrical arcs and sparks when they are cutting and cauterizing. These sparks are much hotter when oxygen is present." He adds, "When you have a fire, you don't claim that the book of matches caused it. Each doctor must decide how much oxygen is safe to use when using an electrosurgical device."

(Note that ECRI wrote the first draft standards for electrosurgical units for the FDA in the 1970s.)

ECRI Institute says, in a poster paper, that airway surgeries that involve ignition sources to cut or coagulate tissue, including electrosurgical units and lasers, pose a significant and sometimes deadly risk of fire. Hazards exist when these ignition sources are used in the oxygen-enriched atmospheres (i.e., more than 23 percent oxygen) that are commonly present in the patient's airway during surgery.

ECRI lists ways to minimize airway fires during electrosurgery, including:
-During tracheostomy, do not use electrosurgical units to cut tracheal rings and enter the airway. Instead, use a "cold" scissors or a scalpel to avoid the risk of fire.
-In the oropharnyx, use only commercially available insulated probes. Do not use red rubber catheters as sheaths. The heat from the active electrode will ignite rubber even in air.
-Scavenge around the surgical site with separate suction to catch leaking O2 and nitrous oxide.
-Soak gauze or sponges used with uncuffed tracheal tubes to minimize gas leakage into the oropharynx, and keep them wet.

Also note that ECRI Institute and the International Association for Healthcare Safety and Security (IAHSS) are hosting a web conference on hospital fire prevention October 15, 2008. Find out more about the event, "Hospital Fires: A Practical Approach to Facility-Wide Prevention," at:
https://www.ecri.org/Conferences/Pages/Hospital_Fires.aspx

FDA Weighs In On Another Fire Risk

In other related news, FDA notified healthcare professionals last week about the potential for spark, fires, toxic fumes and explosions when disposable battery operated lavage systems (BOLS) cables are cut. BOLS are used in the OR, ER, burn units and nursing units.

The cutting of the battery pack's cable can lead to a short circuit, causing the batteries to discharge rapidly, producing intense heat and flammable gases with a resulting explosion that expels flammable gases and toxic chemicals, endangering both patients and staff, FDA says.