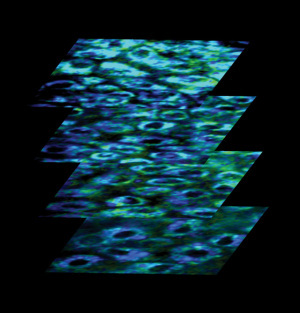 Their findings in animals also suggest that so-called multi-photon fluorescence microscopy-a technique that had generally been limited to the basic science laboratory-might also find use in the clinic.

"We were able to capture physiological information about tissue in a living and breathing animal in three dimensions," said Nirmala Ramanujam, an associate professor of biomedical engineering. "We peered into individual cells in a very non-invasive way to see how things change as early cancer progresses." The ability to examine live tissue is critical because tissue removal erases metabolic features that are hallmarks of cancer, added Melissa Skala, a former doctoral student in Ramanujam's laboratory.

Ramanujam and Skala's findings are scheduled to appear online during the week of November 19-23 in an early edition of Proceedings of the National Academy of Sciences. The microscope they used in the new study is just one of several light-based, or photonic, devices Ramanujam's group is investigating for their potential to identify biomarkers indicative of cancer.

Multi-photon microscopy uses pulses of laser light to excite molecules with the natural capacity to give off light, or fluoresce. In the new study, the researchers used the imaging method to examine cell structure in fine detail and to quantify the relative amounts of two important metabolic coenzymes based on their fluorescence intensity. That ratio provides information about a cell's metabolic rate and oxygen supply, they explained.

They also measured the coenzymes' "fluorescence lifetime"-the amount of time before they give off light-giving additional, though less well understood, insight into the metabolic environment within cells, Ramanujam said.

The researchers captured images of cells in the cheek pouches of almost two dozen hamsters, including several cancer-free animals and others at various stages of early oral cancer. Those pictures revealed significant differences in the structural and metabolic characteristics of early cancer versus non-cancer. Their studies suggested that the fluorescence lifetime is the best indicator of pre-cancer state, making it a promising new way of disease detection.

"There is always a need to identify new biomarkers for cancer or for monitoring the response to cancer therapy," Ramanujam said. "Our goal is to leverage biophotonics to compare well-established markers of cancer to ones that have yet to be exploited."

While existing multiphoton microscopes themselves could be tested in the clinic, Ramanujam said her team's goal will be to design and build simple devices that are tailored for medical use. Collaborators on the study include Kristin Riching, Annette Gendron-Fitzpatrick, Jens Eickhoff, Kevin Eliceiri and John White, all of the University of Wisconsin, Madison. The work was supported by the National Institutes of Health and a Department of Defense Predoctoral Traineeship Grant.