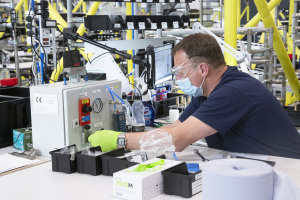 The VentilatorChallengeUK consortium is producing 100 to 200 ventilators per day to help combat COVID-19 in Great Britain.
Members of a U.K. consortium are ramping up ventilator production in the event of a second outbreak of COVID-19.

Set up two months ago, the VentilatorChallengeUK consortium has amassed 33 members that include Airbus, Rolls Royce and Ford Dagenham, among others, all of which are overseeing the development of two ventilator models for the NHS, according to the Barking and Dagenham Post.

“Although the U.K. is widely accepted to have passed the peak of infections in this first phase of the pandemic, we are continuing to scale up our production capabilities to make sure that there is always a ventilator available when a patient needs it, should a second wave strike the U.K.,” Dick Elsy, chairman of VentilatorChallengeUK, said in a statement. “I look forward to seeing VentilatorChallengeUK deliver even more ventilators over the coming weeks.”

The two ventilators in question are based on an existing design by Smiths Group and an adaptation of existing technology from Penlon, and are being produced across nine sites throughout Great Britain.

The two firms together would normally produce between 50 and 60 ventilators per week, but are instead putting out 100 to 200 units per day due to the additional facilities provided by the consortium.

Organizations outside the consortium have also stepped up to create and supply ventilators to providers, including Oxford University and King’s College London, which teamed up to create a prototype that could be rapidly deployed in hospitals.

University College London Hospital also worked with Mercedes Formula One in under 100 hours to develop the first model for an “improved” continuous positive airway pressure device to help sick patients breathe and stay out of the ICU.

“We hope they will make a real difference to hospitals across the U.K. by reducing demand on intensive care staff and beds, as well as helping patients recover without the need for more invasive ventilation,” said professor Mervyn Singer, a University College London Hospital (UCLH) critical care doctor, in a statement.

The VentilatorChallengeUK consortium consists of companies from within the automotive, aerospace and medical sectors.

Potential harm from faulty batteries leads to recall of over 4,000 GE ventilators