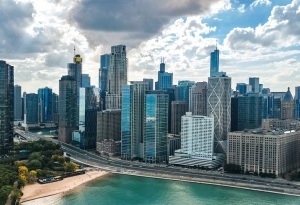 The deal had been in the works since late last year, according to Crain's Chicago Business.

The proposed $1.1 billion merger is set to go as early as February to community meetings in the areas served, with final okays anticipated by summer, according to the Chicago Sun Times.

“We’re a small safety-net hospital on the Southeast Side facing significant financial challenges. We know that the status quo is not working. Without a doubt, this is the right thing to do,” South Shore Hospital President/CEO Tim Caveney noted in an interview with the paper.

The plan calls for replacing the present hospitals — which total 939 beds and are all over a century old — with a single, new one and up to six 30,000- to 50,000-square-foot diagnostic and ambulatory care centers spread among different neighborhoods.

“We’re absolutely committed to not closing any facilities until a new facility is built, and that could be a community health center,” Advocate Trinity president Rashard Johnson told the paper.

In addition, he advised no jobs would be lost as the hospitals are aware that they are “economic engines in the communities.”

In fact, he argued that the $1.1 billion construction price tag would also add jobs.

Mayor Lori Lightfoot was also positive about the proposal, calling it “innovative” and a sign of the “hospitals’ commitment to hearing directly from neighborhood leaders and area residents about local needs.”

The hospitals all had net losses in 2018 — and pressures were mounting.

“Working individually, our hospitals will not be able to provide sustained, quality care on the South Side, given the difficult economic circumstances we’re managing,” St. Bernard president/CEO Charles Holland told the paper.

More than the money woes, faced with aging facilities and shifting community healthcare demands, changing the way healthcare was being delivered would let them all “better respond to and manage the chronic illnesses so pervasive in our communities,” he noted.

“This will help us better manage care here on the South Side, keeping residents in their communities, and being able to offer the right care at the right time through the community health centers, so that we are not just seeing them when they get to the emergency room,” Mercy president Carol Schneider told the Sun Times.
1(current)
2

Will you be attending the Clinical Engineering Association of Illinois (CEAI) meeting this year?