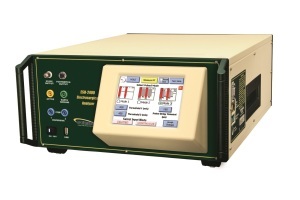 The evolution of equipment such as electrical surgical units has led to more sophisticated models of test devices such as ESU analyzers to continue to accurately assess functionality. Photo courtesy of BC Group
From the January/February issue of HealthCare Business News magazine

For many years, a transesophageal echocardiogram simply involved the insertion of an endoscope through the mouth and down the esophagus where the head of the device would rest, right behind the heart. While providing clinicians with clearer views of the heart compared to transthoracic ultrasound, the procedure carried additional risks.

If the TEE probe had a bite hole, an electrical leakage could occur. The onset of an incident like this so close to the heart put the patient’s life in danger. To prevent this from happening, the Intersocietal Accreditation Commission issued a new standard in 2015 concerning Adult Transesophageal Echocardiography Testing, whereby the structural and electrical integrity of the transducer must be verified between each use with an ultrasound transducer leakage tester.

“The IAC came out and said you cannot use that probe until it’s been electrically tested and proved to pose no harm to the next patient,” Ken O’Day, vice president of sales and marketing for BC Group International Incorporated, a company that designs an electrical leakage tester for this purpose, told HCB News. “That’s moved leakage testing from its traditional place in the biomed arena into the ultrasound and cardiac departments or, depending on the hospitals, anyone else who is actually cleaning the TEE probes between tests. “

The IAC mandate illustrates how the development and use of testing equipment — just like medical devices themselves—are continuously changing. Also like medical systems, such equipment is subject to various standards and regulations from formal agencies, manufacturers, providers, hospital biomed groups, government inspectors, and medical physicists.

More sophistication calls for new test solutions
As X-ray systems have grown more complex, so too has the test equipment used to validate them. One such evolution has been the development of solid-state multi-sensors for measuring X-ray beam properties.
"In the past, there would be a single sensor placed in the beam, and you would measure the strength of its response," said Curt Harkless, president and CEO of Radcal Corporation. "You would manually insert filters into the beam at increasing levels of thickness so that you could characterize the X-ray spectrum. Now, solid-state multi-sensors have multiple sensors with filters in between them so that with a single exposure, you can fully characterize the X-ray beam."

Improvements have also been seen in electrical surgical units that use sophisticated pulsed waveforms that first and second generation ESU analyzers cannot read. As a result, many require a one percent accurate instrument for generator testing, which has led to equipment six years and over that can measure at rates of 5-15 percent accuracy becoming obsolete, according to O’Day.
1(current)
2
3
4