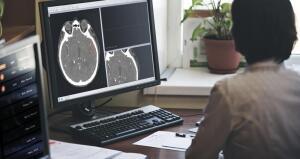 The decision enables the Israeli company to introduce to the U.S. a comprehensive AI package for stroke detection made up of its LVO solution and its previously-cleared AI system for detecting and prioritizing intracranial hemorrhages.

"Initially, Aidoc provides value by helping clinicians rapidly rule out a brain hemorrhage," Ariella Shoham, VP of marketing for Aidoc, told HCB News. "This is critical in determining the course of treatment in early stroke. If a brain hemorrhage has been excluded, a clinician can then confidently administer tPA, and possibly save brain tissue. The second step where Aidoc can show a major impact is subsequent to bleed evaluation, where AI-powered detection of large-vessel occlusion can determine if the patient is eligible for endovascular therapy."

Stroke is responsible for five percent of all deaths in the U.S. and one of the major causes of disability. While thrombolysis, or mechanical thrombectomy, have made it possible to clear occlusions in arteries of the brain, such techniques can only be applied after hemorrhage has been ruled out as a cause.

Aidoc’s solution remains on 24/7, and continuously scans images for both ischemic and hemorrhagic stroke, with suspected cases moved automatically to the top of the radiologist’s worklist. With it, radiologists can diagnose both LVO and hemorrhage in a single context to quickly determine the most appropriate treatment.

A time sensitive condition, the faster treatment is administered to a patient for stroke, the greater their chances of survival without serious neurological impairment. Stroke is often diagnosed in a smaller facility, after which the patient is moved to a specialist stroke center for treatment.

The AI package creates a coordinated process for the diagnosing facility and stroke center to expedite patient care, a fact which is supported by research performed at the University of Rochester Medical Center. The combined package reduced turnaround time for emergency room patients with intracranial hemorrhage by 36.6 percent. Further review by Yale-New Haven Hospital confirmed its impact in expediting treatment for these critical cases.

"In some cases, patients are diagnosed with stroke in a smaller facility before being moved to a specialist stroke center for treatment,' said Shoham. "Some of these centers have limited connectivity to each other's PACS, resulting in delays in communications and limited viewing access. With Aidoc, stroke centers and smaller facilities can work together in a coordinated manner directly through the Aidoc platform."

Both the LVO and intracranial hemorrhage solutions are now available for purchase.

Boston Scientific to acquire Preventice Solutions for up to $1.2 billion total