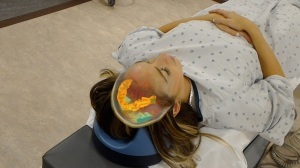 Powered by Microsoft HoloLens, the solution can generate 2D, 3D and 4D images of patients interactively, and accurately overlay them directly onto the patient’s body, enabling surgeons to plan out surgical procedures and preoperative localization more accurately.

“OpenSight will improve care shown to patients by eliminating mistakes and shortening surgery time, which will lead to quicker recovery for patients,” Dr. Steven Cvetko, inventor of OpenSight and head of advanced research and development at Novarad, told HCB News.

The Microsoft HoloLens hardware and OpenSight technology together make up a refractory system used to produce the 3D holograms. The system’s infrared camera within its headset uses ranging and localizing technology to map out the surrounding area, including the patient, and forms mesh surface maps to determine 3D positioning based on the location of objects.

It also places visual tracking tags on patients to keep track of movement and enhance accuracy, and shows virtual incisions for guiding surgeons, shunts and needle placement. Additional qualities include locating the optimal entrance and trajectory for pedicle screws, ACL tunnels and other instrumentation; performing interventional biopsies; and identifying and resecting masses.

“It's designed to be a general purpose tool that all specialties can use. To date, it's been used for Rib Plating and Interventional Radiology,” said Cvetko. “Anyone who uses radiology images can benefit from this. For example, even chiropractors and physical therapists could use it to see patient images and the patient at once.”

A teaching version of the software is available for medical students who want to perform virtual dissections on cadavers.