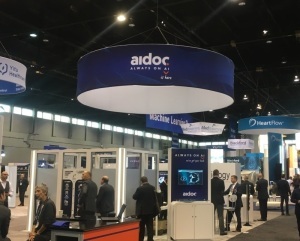 The clearance comes weeks after the company announced it had raised $27 million in venture capital funding, with plans to increase its reach to hospitals worldwide, bringing its total funding to $40 million.

The solutions are meant to speed up treatment and improve patient outcomes by decreasing the time between the scan and a diagnosis, according to the company.

"PE is a time-critical acute finding, which put it next in line," Elad Walach, co-founder and chief executive officer of Aidoc, told HCB News. "PE is also extremely challenging to detect and difficult to diagnose from symptoms alone, which is why our customers felt it would bring them the most value.

According to the U.S. Centers for Disease Control and Prevention, an estimated 60,000 to 100,000 Americans die of deep vein thrombosis and PE annually.

"In addition to the significant value provided to the department by Aidoc's ICH solution, we recently added the PE module to the workflow," Dr. Barry Pressman, chair of imaging at Cedars-Sinai Medical Center in Los Angeles, said in a statement. "I was impressed by the fact that the coverage continuously grows, allowing us to add this product in the workflow of more radiologists, becoming part of our daily work. I was also pleased by the ability of the software to prioritize PE studies accurately"