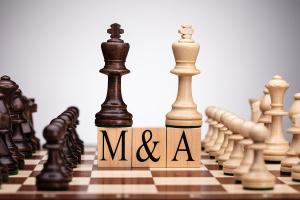 From the May 2019 issue of HealthCare Business News magazine

2018 was an active year for mergers and acquisitions in the technology-enabled medical device sector, and 2019 is off to a good start.

Private equity firms were active in the sector in 2018 and firms such as GTCR, Advent and Genstar acquired companies in the battery, RF systems and asset management sectors.

Resmed made two acquisitions last year. One acquisition in the electronic health record space (MatrixCare) and one in the inhaler sensor and software space (Propeller Health). They shelled out one billion dollars combined for those acquisitions, highlighting their desire to move further into the COPD space with Propeller Health, as well as continuing to build out their EHR business with the MatrixCare add-on.

Another interesting trend are the carve-outs happening with the large strategic players. Private equity is stepping to the plate as large multinationals shed the excess weight that may not be core to their business. Silver Lake Partners picked up ServiceMax (GE) and Platinum Equity paid $1.2B for the glucose monitoring systems and applications from Johnson & Johnson, LifeScan. This LifeScan business unit had more than three thousand employees and five million individual customers.

Royal Phillips was also active last year as they acquired EPD Solutions. EPD is a leader in the cardiac imaging and navigation systems for patients with heart rhythm disorders. Paying almost $300M in cash, this deal also had an earnout component of an additional 245 million. EDP’s innovation is their Kodex-EPD cardiac mapping and navigation system to create high-definition images of a patient’s cardiac structures.

2019 is off to a solid start on the technology-enabled medical device M&A front, as there were two transactions in January, Qualcomm shed their Qualcomm Life business in February, and already three transactions occurred through the first half of March. Interestingly enough, Zoll Medical has already acquired two companies in 2019, acquiring Payor Logic in January and Golden Hour Data Systems in March. Zoll is continuing the march that we are seeing from medical device companies acquiring revenue cycle management and EHR companies.