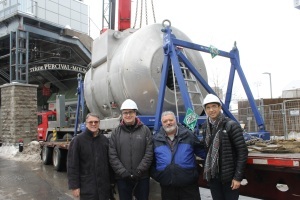 Unlike traditional 1.5T and 3T scanners, the 7T whole-body solution is capable of producing high-resolution images that are not grainy at pixel dimensions measured in tenths of a millimeter, making it an efficient tool for examining the effects of neurological disease in not just the brain, but throughout the entire human nervous system, in microscopic detail.

"A few of the capabilities of the 7T MR can be approached using a 3T MR, but this generally requires extremely long scanning times,” Richard Hoge, director of The Neuro's MR Unit, told HCB News. “Such long scans are often impracticable because of patient motion, so 7T MR will permit exceptionally high-resolution imaging and spectroscopy within scanning times that are feasible in human subjects.”

Plans to install the system at The Neuro span back to 2008, when the facility began designing its North Wing, constructing it with an MR suite that could hold the 70-ton combined weight of the scanner and its shielding. Funding for the solution was provided to a group of researchers there in the form of an $18.8 million grant from the Canada Foundation for Innovation, the Quebec Government’s Ministry of Economy and Innovation, and corporate partners such as Siemens Canada.

The scanner is expected to provide clinicians access to greater capabilities, including more powerful functional MR for localizing specific brain functions to learn how different areas of the brain work together. It also will provide detailed microstructural images for the study of neurological diseases and increased sensitive characterization of biochemical processes in bodily tissues.

Researchers at The Neuro plan to use the system in provincial, national and international projects and partnerships, including McGill's "Healthy Brains for Healthy Lives" initiative for connecting neurological health with overall well-being. They will share their findings with the greater scientific community through The Neuro’s open science policy.

“This is the first of several major acquisitions planned for The Neuro over the next few years that will increase our capacity to support neuroscience research with cutting-edge brain imaging systems,” said Julien Doyon, director of the McConnell Brain Imaging Centre, in a statement.

The solution is situated in The Neuro’s McConnel Brain Imaging Centre (BIC).

It has been cleared for use in Canada and the U.S.