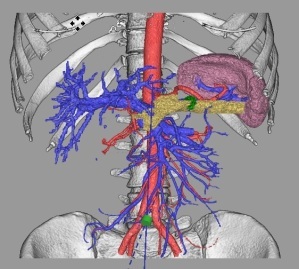 Endoscopic simulator is one of five
new features added to the latest
version of Synapse 3D
FUJIFILM Medical Systems U.S.A. is set to unveil the latest version of its Synapse 3D system this month at the 2019 Healthcare Information and Management Systems Society’s (HIMSS) Global Conference and Exhibition in Orlando, Florida.

A multi-faceted application, Breast Analyzer MR allows users to assess breast tumors with kinetic curves for wash-in and wash-out, as well as subtraction of pre- and post-contrast. It produces BI-RAD reports and performs a range of measurements that include distances from the nipple, skin and chest wall, as well as tumor volume.

Another new feature is a prostate viewer MR for assessing prostate gland tumors and generating PI-RAD reports. The function measures both diameter and volume of the prostate gland and lesions, and offers clinicians a variety of tools for comparing observations of multiple series, T2, ADC, DWI, DCE, and time intensity curves.

MR, however, is not the only modality to benefit from the new additions, with the fifth being an endoscopic simulator CT, designed specifically for laparoscopic surgery simulation. It specifically simulates inflation of the abdomen, port placement, and positioning, while automatically segmenting vessels, skin, bone, pancreas, spleen and tumors.

“The number of healthcare providers expected to realize an enhanced workflow will grow as a direct result of the value and functionality available in the new 3D applications," said Lacy. "The new, advanced applications will have a significant impact on radiologists, endoscopists, gastroenterologists, cardiologists, oncologists, surgeons, urologists, and other specialists.”

In 2017 Fujifilm launched version 5 of its Synapse PACS system, which gained a Risk Management Framework-based Authority to Operate (ATO) on U.S. Department of Defense networks. It also showcased both this and Synapse 3D this past November at the annual RSNA meeting in Chicago.