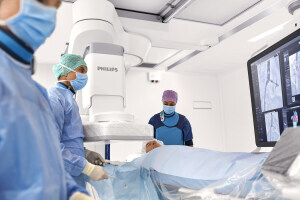 Philips has released a new angiography system designed to increase the flexibility of positioning for imaging during complex procedures.

The Azurion with FlexArm is the newest version of what the company dubbed its “next generation” Azurion platform, released two years ago and designed for hybrid ORs for multiple specialties, including minimally-invasive cardiac procedures.

The system, powered by what the company calls a “smart kinematic engine”, moves on eight different axes, controlled with a single “Axsys” controller, allowing it to come in at any angle around the table, says Ronald Tabaksblat, business leader for image-guided therapy systems at Philips.

“As procedures have gotten more and more complex, it’s becoming harder to find room for people around the table,” Tabaksblat told HCB News. “Everybody can have his or her preferred location around the table and the imaging equipment can come in where the physician needs it, not where the technology dictates.”

Tabaksblat said that while the groin has been the main access point for cardiac procedures, other access points, such as the wrist, called radial access, or the foot, have become more common.

“The system needs to be tailored for any access point from neck down to the toe,” Tabaksblat said. “The previous system allowed 90 degree or 180 access to table but nothing in between. It can squeeze between two people at an angle.

The need to move the table, and also heavy patients, is also significantly decreased.

“In some procedures, the doctor may move the table up to 100 times per case,” Tabaksblat said.

The company has already installed two systems in the U.S. and one in Germany.

"With FlexArm, Philips' engineers have overcome near-impossible geometric and mechanical barriers to enable clinicians to achieve clinical excellence in image-guided therapy," Dr. Barry Katzen, founder and chief medical executive of the Miami Cardiac & Vascular Institute, Baptist Health South Florida, said in a statement. "FlexArm enables us to dramatically optimize procedures around the patient; we can get the optimal view of what's going on inside the patient without encumbering all of the clinicians that are working around the table. The result is an innovation that's not only clinically important but also very simple and intuitive to use – a critical factor in the heat of a complex procedure.”