Using ultrasound, MR contrast agents can be made to blink like bicycle lights 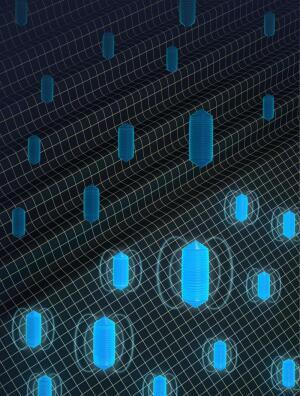 As illustrated here,
the contrast agents
give off magnetic signals
Researchers at the California Institute of Technology have found a way to use ultrasound to make MR contrast agents blink like bicycle lights.

“We use ultrasound to erase our MR contrast agents because ultrasound waves are easily generated and administered to the body, and are generally safe, as known from ultrasound imaging,” Mikhail Shapiro, assistant professor of chemical engineering at Caltech, told HCB News.

New contrast agents, such as magnetic nanoparticles, can be specifically targeted to regions of interest, but they can be hard to differentiate from tissues, which emit their own MR signal. A dark patch near a tumor could be a contrast agent or it could be unrelated signal from surrounding tissue.

The new "erasable" contrast agents have the ability to blink off on command to make them easier to spot. That will make it much easier for radiologists to read MR scans properly.

The new technology leverages nanoscale structures called gas vesicles that are naturally produced by some microbes. Since the hollow chambers of the vesicles bounce back sound waves in distinct ways, they are easy to tell apart from surrounding tissue.

In a study published in Nature Materials, Shapiro and his team demonstrated in mice that gas vesicles can be used as MR contrast agents. They were detected in certain tissues and organs, including the brain and liver.

“This technique should work in most parts of the body. We just used the brain and liver to demonstrate the basic concept,” said Shapiro.

In addition, the gas vesicles were capable of turning off. When they were hit with ultrasound waves of high enough pressure, the cylindrical structures collapsed and their magnetic signal went out.

Past studies have shown that gas vesicles can be genetically modified to target receptors on specific cells, such as tumor cells. Groups of gas vesicles can be engineered differently, which would allow physicians and researchers to visualize two types of tissue at once.

For example, one group could be designed to target a tumor and another could stay in the blood stream to outline blood vessels.