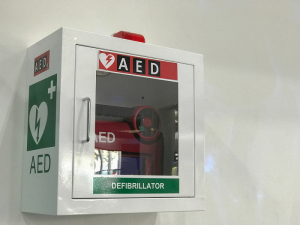 From the May 2018 issue of HealthCare Business News magazine

Each year there are over 350,000 out-of-hospital cardiac arrests (OHCAs) in the U.S. alone. Without emergency intervention by a bystander or first responder, the average survival rate is less than 10 percent. Furthermore, survival decreases 7 to 10 percent each minute into cardiac arrest. Rapid administration of CPR and the appropriate use of automated external defibrillators (AEDs) have been shown to increase survival rates to between 38-50 percent.

Over the past two decades there was a concerted national effort to educate and populate our communities with life-saving AEDs. These public access defibrillators (PADs) are meant to minimize response time to victims of OHCA and save lives.

However, the initial wave of enthusiasm by community and municipal partners is not always sustained, and in many cases, proper maintenance of these devices has been neglected. Once deployed in the field, there is little oversight of devices by manufacturers or local municipalities, making regular reporting of recalls and scheduled maintenance difficult.

Case reports of AED malfunction are present throughout the literature but the true incidence may be underestimated. A potential AED failure can manifest during routine maintenance, but without proper maintenance failures may only come to light during an incident cardiac arrest, a relatively rare occurrence at any individual PAD site.

Our study sought to estimate real-world PAD functionality and rates of registration by surveying over 300 devices at 190 public-access sites in Seattle, Washington, Suffolk County, New York, Louisville, Kentucky, and Central Illinois. Testing was performed according to manufacturer guidelines and included assessment of PAD kits, expired components, and battery functionality.

Fully one out of five devices in our study had expired components. As many as 5 percent did not power on due to non-functioning batteries, representing a potential life-threatening device failure. More than a quarter of all sites had PADs that failed at least one phase of testing, with significant variability between regions (Figure 1).

We found that regions with higher defibrillator registration rates were less likely to experience testing failures, with less than 5 percent failure rate in Seattle. By comparison, almost 40 percent of devices in Central Illinois had either non-functional batteries or expired pads.

In our study, PAD registration seemed to be associated with higher likelihood of passing testing, so it would follow that educational campaigns to improve registration rates and re-engage the public may prove fruitful.
1(current)
2
3

Read more stories from the May 2018 issue

MR may cut overdiagnoses for prostate cancer in half