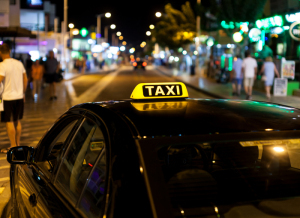 Yesterday, there was a big snow storm in New York but because I live nearby, I decided I would walk into the office. On my way, it was sleeting and I saw a taxi and flagged it down.

The taxi driver was an Egyptian, who oddly enough, had formally been an x-ray engineer in Egypt.

He told me that his car battery was dead that morning and he used a portable battery and rigged up a makeshift jumper cable to get his car started so he could come to work.

All I could think of was, here is a person who knew how to make it happen.

The last funny taxi story happened when I was in Chicago this past November for RSNA. The driver who picked me up bragged to me about how he had sold used equipment in his home country of Ethiopia and used that famous website, DOTmed, to find it.

Back in the 70s, when I first came to New York, I was a taxi driver myself. Those were the days.