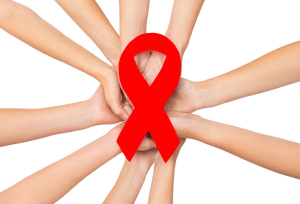 Epidemics and outbreaks always receive a great deal of attention. Unlike the bird flu of a few years back, or the horrifying, but typically distant accounts surrounding the Ebola epidemic, Acquired Immune Deficiency Syndrome, or AIDS, was an epidemic that hit U.S. shores pretty hard. At its height in the mid-‘90s, more than 40,000 people died from AIDS-related illnesses in a single year.

Initially, HIV and AIDS were perceived to be diseases seen among gay men or intravenous drug users. With that perception came persecution and, unfortunately, some leaders in religious communities fanned those flames, pointing to AIDS as a punishment for sin. There was a lot of misinformation and a lot of fear. With limited knowledge about HIV and AIDS, there wasn’t an effective treatment, so contracting AIDS was seen as a death sentence.

With that understanding — that there was public persecution of AIDS victims, that there were community leaders claiming it was a punishment for sin, that there was no treatment and that the public was misinformed and terrified — imagine for one moment being a child and hearing all these news reports. Now, imagine that you’re a child with the disease. That’s exactly where the world was when Ryan White contracted AIDS. White was a hemophiliac and in the early ‘80s our country’s blood supplies weren’t shored up against the unfamiliar disease. He wasn’t homosexual. He wasn’t an intravenous drug user. He was a child with an unfortunate condition. Yet he was still banned from attending school. Parents protested to keep him out, with both teachers and parents believing the disease could be spread through casual contact, even though doctors said he posed no risk to other students.

Ryan’s mother, knowing her son wouldn’t have a chance to grow up, wanted to give him as happy a life as possible. Ryan wanted to be back in school and she wanted to get him there. The two pulled up stakes and moved to Cicero, Indiana, where he was welcomed into the school. Ryan’s struggles put a face to the AIDS epidemic and it was a face of the boy next door. It provided proof that America was facing a horrible disease, not a religious reckoning. Charities were established, research was funded, celebrities championed awareness campaigns and efforts were made to educate the public and separate fact from fiction.

White became a celebrity in his own right, working to educate people across the country. A number of celebrities became his friends, among them, Michael Jackson, Elton John, basketball legend Kareem Abdul- Jabbar, Nancy and Ronald Reagan and then-Surgeon General Dr. C. Everett Koop. He even had a visit from his celebrity crush, Alyssa Milano, who gave him a friendship bracelet and a kiss on the cheek. White stated on more than one occasion that he would trade the fame in an instant to be cured. Still, he carried on his work as a spokesperson and public face for AIDS. That time drew to a close on March 29,1990, when he went to the hospital with a respiratory infection. He died a little more than a week later on April 8 at the age of 18.

More than 1,500 people attended his funeral and Elton John and Phil Donahue were among his pallbearers. President Reagan wrote a tribute to White, which was published in The Washington Post. White never asked to be a household name, yet the country couldn’t have asked for more when it came to opening a dialogue and increasing understanding of one of the deadliest epidemics of the last 40 years.