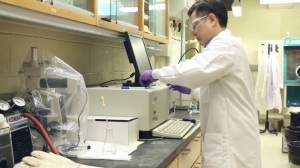 Two researchers are hopeful that nanoparticle ultraviolet radiation technology may be the next step in killing cancer cells while cutting down on dangerous high-energy radiation doses.

"Our UV nanoparticle technology could be used in place of the chemotherapy drugs to enhance treatment effectiveness in a nontoxic way, while lowering overall radiation doses, which will, in turn, minimize side effects such as nausea, dizziness, various pain, radiation burns and bruising," You-Yeon Won, a professor in Purdue's School of Chemical Engineering, said in a statement.

The nanoparticle is made of stable inorganic material that is housed in a capsule of nontoxic material already approved by the FDA.

"Annually, in the United States, about one million cancer patients receive radiation treatment, and about half of those patients qualify for radio-sensitization treatments, where they receive additional agents to enhance the radiation effect,” noted Won. “Chemotherapy drugs, the agents typically used, even if locally administered to the tumor tissue, spread and produce side effects in other normal tissue regions, unavoidably adding side effects to side effects."

The firm's “Radio-Luminescent Nano Particles,” provide “a secondary source of radiation to solid cancer tumors,” according to the Purdue professor.

"X-ray and gamma ray beams provide the primary sources of radiation in treatment, but they pass through a lot of normal cells, which is the main reason why patients experience bad side effects," he said.

Co-founder Kim added in a video report that the particles “create a localized UV light only within the cancer tissues.”

Won recounted how he stumbled on this anti-cancer strategy while doing unrelated research.

"A few years ago our laboratory developed a DNA carrier that becomes dissociated under UV irradiation,” he reported. “In order to make this UV approach applicable to clinical situations, we started thinking about how we can irradiate deep tissue by UV light, so we came up with the idea of using UV-generating materials.”

Experimentation led to the discovery that cancer cells were “very vulnerable to, and die” when exposed to UV radiation. This led to the development of UV-generating particles.

"In fact, people have known for more than 50 years that X-ray beams kill cells much better when combined with UV light, but I believe no one before us has ever thought about using UV light in clinical radiation therapy," he said.

Beyond that, he suggested that the new technology is “completely compatible” with present radiation approaches.

The firm used studies in cell cultures and cell implants in mice to determine that its nanoparticles are nontoxic — and that they significantly enhance high-energy radiation's cell-killing ability.

"We have recently received approval to start animal clinical trials at Purdue's College of Veterinary Medicine in collaboration with Purdue veterinarians, and we are ready to recruit animal cancer patients, dogs and cats with late-stage cancer for this pilot study to be able to further prove its effectiveness and gather relevant pharmacological information," Won reported.