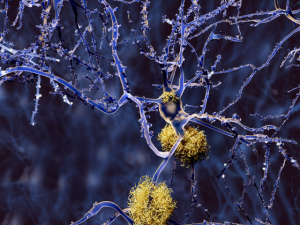 Neurons with amyloid plaques
Researchers at Gothenburg University in Sweden have created an international reference method that standardizes the diagnosis of Alzheimer’s disease decades before symptoms are present. Wherever patients reside, they will now be tested the same way.

The onset of Alzheimer’s can start in middle age and progress unnoticed for decades until the nerve cells are so damaged that patients start to experience impaired cognitive abilities and memory issues. By that stage, the diseased has progressed too much to be treated.

If a treatment for Alzheimer’s is not developed in the near future, the prevalence and cost of the disease will continue to rise. An analysis from the Alzheimer’s Association International Conference found that more than 28 million baby boomers will develop Alzheimer’s by 2050 and the cost of caring for them will make up almost 25 percent of Medicare spending in 2040.

The researchers at Gothenburg University were able to find a way to measure the exact amount of beta amyloid in patients' spinal fluid, which can diagnose Alzheimer’s ten to thirty years before they start experiencing symptoms.

Work is also being done in other parts of the world to try to diagnose patients sooner. Researchers from the University of Texas have created a non-invasive test using electroencephalogram (EEG) technology to determine who is at most risk of developing Alzheimer’s.

At the annual SNMMI conference in June, Dr. Victor Villemagne, a leading molecular imaging researcher at Austin Health, Heidelberg in Victoria, Australia presented findings that a cloud-based platform called CapAIBL can interpret amyloid PET scans in a standardized format. Villemagne believes that it could lead to earlier and more accurate diagnosis of the disease, as well as more appropriate treatment.

"These new drugs will likely prove most effective for persons who have just begun to accumulate beta amyloids in their brain. Then a well-proven and standardized method becomes crucial, as it ensures that these people are identified in a diagnostically safe and precise manner," Kaj Blennow, professor at Gothenburg University and one of the researchers of the international reference method, said in a statement.