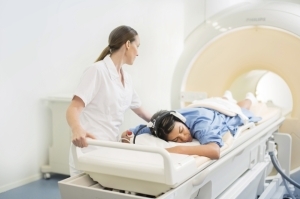 Many doctors and most patients have probably never heard of focused ultrasound, but the pace of research, clinical trials and device manufacturers dedicated to the emerging technology could very well give it a solid place in mainstream medicine soon.

“The dialogue has shifted this year from if to when,” says Dr. Neal Kassell, chairman of the Focused Ultrasound Foundation. “What remains to be sorted out is the indications where focused ultrasound can provide solutions that fulfill unmet clinical needs.”

Treating uterine fibroids is one application where the technology has been most successful.

In the U.S., it’s the only indication approved for FUS. The Israeli company InSightec Ltd. received U.S. Food and Drug Administration clearance in 2004 for its MR-guided FUS system to treat women with uterine fibroids, followed by a second indication for pain relief from bone metastases. According to Lynn Golumbic, the company’s director of marketing, ten thousand women have been treated using the technology so far.

Philips Healthcare also has an MR-guided FUS system but it’s only approved in Europe, Canada and Korea to treat uterine fibroids, with FDA clearance pending.

FUS focuses high intensity ultrasound waves to a target deep within the body. But it can only work with the help of MRI guidance, and regular ultrasound in some cases, to precisely see the target and monitor the heat being generated. One company, HistoSonics, has even developed an off-shoot HIFU treatment called histotripsy. Whereas HIFU applies focused sound until the targeted tissue is destroyed by heat, this technique uses much shorter, higher-amplitude pulses, which are powerful enough to destroy the tissue without heat. It’s tracked with ultrasound imaging.

FUS treatment of uterine fibroids heats the fibroid to about 65 degrees centigrade —enough to ablate the tissue without putting the patient at too much risk.

“With MRI, we see temperature coming up and you can intervene in time to not do permanent damage,” says Thomas Andreae with Philips’ MRC Therapy Business Development unit.

He points out that Philips’ technology, the Sonalleve, is volumetric heating with real-time feedback allowing the clinician to focus rapidly on larger areas thereby treating fibroids more efficiently. MR-guided FUS treatment for fibroids takes about three hours to treat and can be an alternative to a hysterectomy — which is a more risky surgery that involves removal of the whole uterus along with an extended recovery period.
1(current)
2
3
4
5