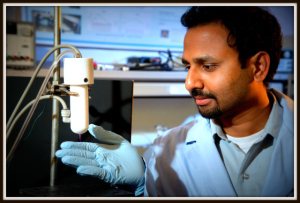 A sterilizing device
that uses plasma.
Two surprising new infection control tools have popped in research settings, and may be coming to kill bacteria in a hospital near you in the not-too-distant future. The latest potential weapons? Copper surfaces and cold plasma.

When a bacterium falls on copper tables or doorknobs, the copper can pull the electrons away and disrupt its biological processes. ECRI Institute has been investigating the phenomenon for the last three years.

A preliminary study in the Infection Control and Hospital
Epidemiology found that outfitting ICU rooms with copper touch surfaces can reduce the number of hospital acquired infections by 58 percent.

Plus, one benefit of using copper surfaces is that it's a passive technology, unlike UV light systems, which require human interaction.

The power of plasma

Elements of the plasma, such as ions and free radicals, react with organic materials on a microscopic scale. Once the researchers found a way to make plasma room-temperature, they knew they had something promising.

"We tested infectious bacteria, and basically what we find is these cold plasma reactive species react with these bacterial cell surfaces and basically rupture," said Magesh Thiyagarajan, director of Plasma Engineering Research Lab (PERL) at Texas A&M. "Then you're looking at instant sterilization."

Thiyagarajan said hospitals could use the plasma in a microwave-style chamber to disinfect hospital supplies like syringes and scissors. The team also developed a plasma spray that could be used on surfaces, and a thin plasma "needle" that could be used for small area treatments, such as on dental tools.

He said he hopes to have plasma-based products in hospitals for testing within the year.