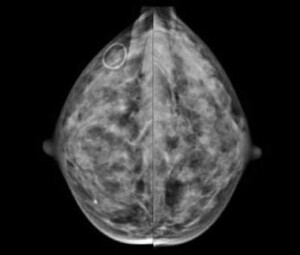 Image of a dense breast
(Credit RSNA)
The fight for breast density notification legislation has taken another step forward. Advocates proposed an amendment to the Mammography Quality Standards Act (MQSA) that would require that women screened for breast cancer be informed if they have dense breasts.

Currently, 12 states have enacted breast density inform laws. But language in the inform letters vary among the states, and women who live in states without the laws are often left in the dark about their status. Breast density makes cancer very difficult to spot on a mammogram and raises a woman's risk of developing breast cancer.

"For example if you live in New York, you'll get your results, but if you're in New Jersey you won't because their law hasn't passed yet," JoAnn Pushkin, who proposed the amendment, told DOTmed News. She's the co-founder of Density Education National Survivors' Effort. "And it can really be a question of life or death."

Pushkin approached the FDA about adding an amendment and learned, fortuitously, that the MQSA was up for reauthorization. Together with other advocates and radiologists, Pushkin succeeded in getting the agency to consider the regulatory amendment.

She hopes the amendment will require notification in states that clearly and unambiguously tell a woman she has dense breasts, and for doctors to explain what that means. Less effective language, such as that sent out in Maryland, starts notification with "If your mammogram shows that your breast tissue is dense you should know...", a potentially confusing message.

"I'm hoping that it would be at least as stringent as the best state language, like the kind used in New York," said Pushkin.

Though recent studies have called ultrasound the best imaging method for dense breasts, Pushkin doesn't think the notifications should include any further prescriptive advice beyond encouraging women to discuss further steps with their doctors.

In December, the proposal will be submitted for public comment. Pushkin hopes to see the amendment incorporated some time in 2014.