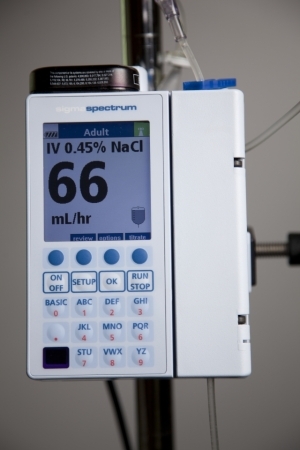 At WellSpan Health York Hospital, setting up an infusion for a patient is as easy as scanning groceries. Nurses who once may have had to interpret notes scribbled on a scrubs leg now scan barcodes on a patient, on a drug bag and on the pump. The patient’s information then appears like magic, without the frustration — or danger — of hitting a wrong button.

York Hospital was one of the first to take the plunge into integrating infusion pumps with EHRs, teaming up with Cerner and Hospira back in 2010. Since then, only 10 or so hospitals have done the same, according to KLAS research, though an upcoming KLAS report will itemize the growing number of facilities with integration in the works.

“I think everybody wants it, everybody talks about it, but there’s a lot of competing resources for IT time and for the hospital organization just to focus on,” says Coray Tate, VP of clinical research at KLAS.

Plus, the ease of workflow after implementation belies the complexity of setting up an integration program.

“It has been extraordinarily hard and complex, even though it’s just scan-scan-scan,” says Kris O’Shea, clinical transformation officer at WellSpan Health.

Despite the challenge, and the piles of health IT knowledge O’Shea was made to absorb along the way, she says the transition was worth it. But that doesn’t mean facilities should jump to educate their smart pumps without the prerequisites. O’Shea, along with other infusion pump experts and vendors, shared with DOTmed Business News the challenges and rewards of building a wireless, integrated system for pumps.

“Smart pumps,” infusion pumps loaded with drug libraries, have been around for a decade now, and have done much to improve safety. Facilities load drug information along with dose parameters specific to each drug that can’t be exceeded.

But smart pumps aren’t always geniuses, and can’t prevent all user errors. In an ECRI survey of 100 infusion pump errors, 29 percent were concentration issues and 19 percent were programming issues.

“Smart pumps are very good at catching a gross programming error,” says Sparnon. “But since you have to set your dose parameters to allow most therapies, you don’t want to alert on every single medication, so the ranges are pretty large. That means a drug library might not catch a subtle mis-programming change.”
1(current)
2
3
4

Read more stories from the May 2013 issue