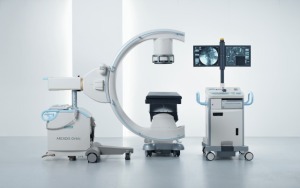 The Siemens ARCADIS
From the April 2013 issue of HealthCare Business News magazine
On a typical day, the mobile C-arm at South Florida Vascular Associates in Coconut Creek, Fla., scoots around just as much as the busy staff. Whether it’s helping clinicians identify circulatory issues to diagnose and treat critical limb ischemia or creating cerebral angiograms of the head, the clinic’s Ziehm mobile C-arm works hard to provide high fidelity, high-resolution images for tricky procedures.

Dr. William Julian, president of South Florida Vascular, hopes the system’s next upgrade will push the imaging workhorse to do even more.

“I’m really pressing it to do all it can do, constantly moving the C-arm back and forth,” says Julian. He’s going to invest in Ziehm’s new release, a motorized C-arm, towards the end of the year. Besides the benefit of being able to control the C-arm himself with a joystick, he’s excited that he’ll simply be able to roll out ol’ reliable and bring in the new model. “In five minutes, I’ll have my new room,” he says.

Julian’s experiences exemplify several of the reasons the mobile C-arm sector is set to continue growing slowly but surely – 2.5 percent between 2012 and 2016, according to a new report from Research and Markets.

The rise in outpatient clinics like Julian’s as well as a sustained interest in cost saving are leading facilities to sometimes choose mobile C-arms over pricey fixed rooms. Mobile C-arms are also more versatile than ever and can stand to do high-end procedures like those Julian performs.

Meanwhile, the fixed C-arm market continues to expand as hybrid operating rooms become increasingly popular. The interventional X-ray market is projected to grow by 2.3 percent annually through 2017, according to analysis from Frost & Sullivan. And as surgery becomes even more precise and minimally invasive, both C-arm options will have to evolve to keep pace.

16,000 shades of gray
In recent years, the emergence of flat panel detectors for mobile C-arms has been one of the industry’s most talked about innovations. Flat panel detectors can show 16,000 shades of gray, four times as many shades as image intensifiers, all while using less dose. While the technology has existed in fixed systems for around 50 years, the German company Ziehm Imaging GmbH was the first to bring the technology to mobiles back in 2006.

Because of its high cost, adoption of the new technology has been slow, but shipments of FPD mobile C-arms are predicted to increase 54 percent by 2016, according to a November 2012 report by IMS Research. Currently, around one third of Ziehm’s C-arm sales include flat panel detectors.
1(current)
2
3
4
5
6