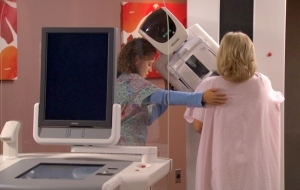 Published in the Jan. 7 edition of the Radiological Society of North America's scientific journal Radiology, this was the first large-scale prospective study showing additional invasive cancers found with 3D mammography in combination with 2D mammography.

Results are based on 12,631 screening examinations in a large hospital in Norway, utilizing Bedford, Mass.-based Hologic, Inc.'s mammography technology. Hologic develops, manufactures and supplies premium diagnostics, medical imaging systems and surgical products. The company's 3D mammography technology is used in 47 states and 30 countries outside the U.S.

"What's really amazing about the results of this trial is the fact that it does find those hidden cancers 2D isn't picking up," Dr. Peter Soltani, Hologic's group general manager of women's health, and leader of the tomosynthesis development program, told DOTmed News. "3D does not do this by increasing the number of false positives; in fact, it reduces them. The accuracy of a 3D screening is better not only for patients, but also for the health system as a whole, reducing the cost of unnecessary false positives."

Further to this, Soltani said that the use of combined 3D and 2D screening may make it easier to identify cancer in women with dense breasts — a buzzworthy issue of late.

Since 3D mammography was approved for clinical use for breast cancer screening and diagnosis in the U.S. in February 2011, a number of major papers demonstrating the value of 3D mammography have been published, particularly in the last few months (just this past November, DOTmed covered a presentation at RSNA's annual meeting about the study that formed the basis of the Food and Drug Administration's approval of Hologic Inc.'s tomosynthesis — and subsequently its use in the clinical space).

Before this type of combined screening goes mainstream, however, barriers to clinical adoption remain. Namely, reimbursement woes. This is where professional societies like the American College of Radiology are needed to step in and give support, according to Soltani.

"The next thing that will have to happen for really broad adoption is to make sure doctors get the proper reimbursements in place for this technology," he said.

But while this new finding addresses a lot of limitations, Soltani referred to this technology as the "tip of the iceberg."

"[Hologic is] constantly trying to come up with the best way to provide economically driven, cost effective and clinically beneficial solutions to radiologists so they can find cancers, treat them effectively and save lives," he said.