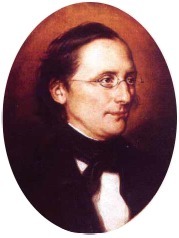 Carl Friedrich Wilhelm Ludwig’s career began with an article on the process of urinary secretion. While that may not sound like an illustrious start, Ludwig went on to become a prominent German professor and one of the most important names in the history of physiology.

Born December 29, 1816 in Witzenhausen, Germany, Ludwig studied medicine at Erlangen before receiving his medical degree at Marburg in 1839. An active fencer during college, Ludwig carried a deep scar above his upper lip thanks to the sport. That incident was a rare blemish in Ludwig’s time in Marburg, where he spent 10 years climbing the ranks as a professor and publishing influential articles.

Ludwig’s first article, published in 1842, demonstrated the relationship between urinary secretion and other chemical and thermal reactions in the body. It was one of the first scientific articles to draw a distinction between human anatomy and function. Also in the realm of secretion, Ludwig revealed a new class of secretory nerves that control the salivary glands. He showed that even when an animal is decapitated, its salivary glands continue to secrete when the nerves in question are stimulated. He also showed that organs could be kept alive outside an animal by pumping blood or saline solution into the excised part.

Ludwig was also interested in circulation and respiration. In 1847 he invented a device called the kymograph that used a mercury manometer tube and a revolving drum to graphically record blood pressure variations and other vital signs. The device, along with later modifications, became a standard tool for recording results of experiments. With a student, in 1859 Ludwig designed a mercury pump that separated and measured oxygen and carbon dioxide in the blood. His 1867 stromuhr measured the flow of blood. In addition to his inventions and scholarly articles, Ludwig also wrote the first modern physiology textbook.

This physiological research was part of a scientific revival that took place in the mid-19th century in Germany. Around 1840, young medical doctors began arguing the idea that “medicine = science;” medicine had previously been considered an art rather than a science. Medical schools began focusing on scientific breakthroughs in the way the body works, such as new research in the life of cells. Physiology became an accepted science as Ludwig and his colleagues worked to prove the idea that chemical processes rather than a “vital life force” control functions in living things.
1(current)
2