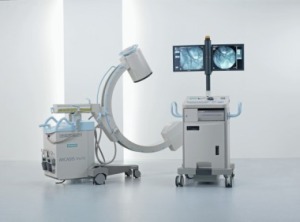 A C-arm system (Credit: Siemens)
The flat panel detector mobile C-arm market will grow over the next four years as prices fall and providers are lured by high quality images and potentially lower radiation doses compared with image intensifier-based systems, according to a new InMedica market forecast released this week.

Image intensifiers, first introduced in the 1960s, are vacuum tube-based systems that convert X-rays into light, then into electrons, and then back into light again, which is typically captured by TV cameras and transmitted to a screen viewed by the radiologist. FPD technology, developed in the 1990s, uses solid-state detectors to convert X-rays into digital signals.

InMedica said the FPD C-arm market would grow 54 percent from 2011 to 2016, as price erosion should flatten FPD costs and as providers continue to turn to mobile C-arms for their versatility: the mobile units can move from department to department, and can undertake a variety of applications, from orthopedics (which dominates in North America) to pain management and even cardiovascular procedures, such as transcatheter aortic valve implantations.

However, FPD with its higher costs will remain a relatively slim piece of the mobile C-arm pie, the firm said.

"FPD units represented 9 percent of total unit shipments in 2011 — still a fairly small proportion," InMedica analyst Sarah Jones told DOTmed News by e-mail. "In some regions it is a much higher percentage — with 15 percent and above being FPD."

How much cheaper is II-based equipment? In North America, II equipment ranges from $100,000 to $160,000, Jones said, depending on whether it includes navigation software for vascular or cardiac procedures. FPD equipment can cost from $180,000 on the low end to upwards of $200,000 with navigation packages, she said.

In North America, orthopedics is a "fairly saturated" market and will remain stable but not drive growth, Jones said. That could come from new outpatient clinics targeting pain management of spine and para-spinal related pain disorders, using the C-arm for drug deliveries, she said.

In any case, most of the revenue in this market is concentrated in the hands of the top players. Jones said the leading four OEMs, Ziehm Imaging, Philips Healthcare, Siemens Healthcare, and GE Healthcare, represent more than 85 percent of global C-arm sales.