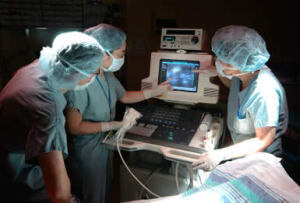 A sixteen-year-old softball pitcher felt a painful click in her elbow every time she threw the ball. Her doctors were perplexed: X-rays and MRI scans showed nothing amiss. But using a real-time ultrasound of her elbow as her arm went through the pitching motion, doctors discovered the cause of the troublesome click: the head of the radius partly slipped out of joint.

"We were able to tell in real-time that this is the patient's problem," said Dr. Levon Nazarian, a radiologist at Thomas Jefferson University in Philadelphia. If doctors had first referred her for a sonogram when she came in with the complaint "it would have saved a lot of money and time and pain for her," he said.

Nazarian told this story during his talk at the Ultrasound First Forum, held Monday at the New York Marriott Marquis in Times Square. Organized by the American Institute of Ultrasound in Medicine, the event aimed to compel providers to consider ultrasound before other more expensive, and potentially less safe, types of imaging, for a range of clinically indicated conditions — including in sports medicine.

"Just about every structure that's likely to be injured in an athlete, we have some way of assessing it with ultrasound imaging," Nazarian said.

According to Nazarian and many other attendees, ultrasound has several advantages. It's portable, which means it can be brought fieldside for an in-game scan, it can be used in real time to find the source of the pain, and it's much cheaper than the main competing modality, MRI.

For at least some conditions, it goes toe-to-toe with MRI for accuracy, such as rotator cuff tears, Nazarian said. In a meta-analysis published in the June 2009 issue of the American Journal of Roentgenology, Nazarian and his colleagues found MR and ultrasound both had around 85 percent sensitivity and between 90 and 92 percent specificity for finding the shoulder injury. (MR arthrography, however, which involves the injection of a contrast agent, had the highest sensitivity and specificity; the article recommended ultrasound, or MRI, as a frontline tool and MR arthography for ambiguous findings.)

Ultrasound goes to the Olympics

But it's making some inroads in elite sports medicine. Bill Moreau, managing director of sports medicine for the U.S. Olympic Committee, said a recent in-house analysis revealed USOC used 500 percent more ultrasound than MRI at its headquarters in Colorado Springs. He said they performed in a recent training season 284 ultrasounds, 308 X-rays and 33 MRI scans.
1(current)
2
3