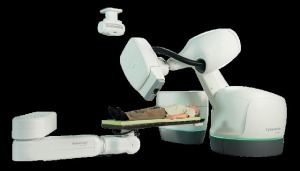 Accuray said Thursday that the device and its new InCise Multileaf Collimator, available on the two higher-end models of the M6 Series, received FDA 510(k) clearance.

Accuray's new TomoTherapy line, which also debuted at ASTRO, had received FDA clearance before the show started, the company said.

The MLC is used to sculpt the X-ray beam to the size and shape of the tumor. It has a bigger opening than the CyberKnife's previous collimator and allows, theoretically, faster treatment times for some tumors, a company representative told DOTmed News this week. Researchers with Fox Chase Cancer Center in Philadelphia found theoretical treatments 35 to 70 percent quicker, he said.

The MLC allows the CyberKnife to better treat bigger, irregularly shaped tumors, the company said in its press release.

The new CyberKnife models are the FIM and FM, which feature the MLC, and the FI, which doesn't. The FM and FI are upgradeable.

The company said the equipment would probably start shipping, at least to Europe, later this year.