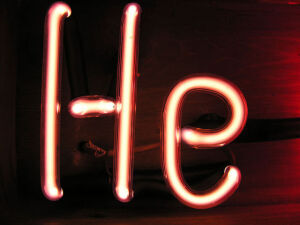 A consortium of medical imaging equipment manufacturers is asking Congress to help shore up the nation's helium supply before it goes up in the air.

In a letter to lawmakers of both parties in both chambers, the Medical Imaging and Technology Alliance, or MITA, said that the Bureau of Land Management could be forced to shut down the country's Federal helium privatization program as early as next year, taking 30 percent of the world's helium supply out of circulation.

This, in turn, could hurt companies that manufacture MRI scanners and radiologists and hospitals that run the equipment, MITA said. MRI magnets only work at extremely low temperatures, and super-cold liquid helium is used to keep them chill enough to function.

"If Congress fails to step in to avert this crisis, MRI manufacturing facilities will be forced to slow or shut down production, while patients seeking MRIs in hospitals and physician offices may be turned away due to an insufficient helium supply," wrote Gail Rodriguez, executive director of MITA, in the letter.

The health care industry uses about 28 percent of the globe's helium supplies to keep MRIs in operation, according to research carried out by Moses Chen, a professor with the University of Pennsylvania who testified before Congress in May.

A GE Healthcare executive, Tom Rauch, also testifying at the congressional hearing, said his company uses nearly 5 million liters of helium a year in the production of 1,000 MRI scanners at a South Carolina factory. Another 6 million is used to service machines already in use at hospitals and imaging centers, he said.

The U.S. is the world's biggest producer of helium, supplying about three-quarters of its needs, and has been storing the inert gas for defense and research purposes in an underground reservoir in Texas since the 1920s. However, a 1996 law requires the government to sell off the Federal Helium Reserve by 2015 in an effort to pay down the system's debts.

Once the debt's paid, which could happen as early as next year, the fate of the program is up in the air, a BLM spokesman told DOTmed News. Even if the reserve keeps running, however, it might not last the decade. The reserve itself has about 13 billion cubic feet of helium, all told, which at current rates of consumption should last just under seven years, he said.

Why the letter now? MITA hopes it can convince Congress to take action, possibly before the year's out, such as passing the Helium Stewardship Act (S. 2374), proposed legislation that would let the reserves stay open after 2015. However, MITA said it was worried the bill could slip through the cracks during the coming "lame duck" congressional session.