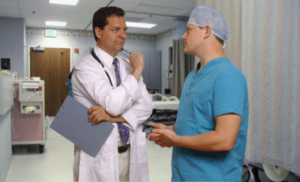 The U.S. Preventive Services Task Force's recommendations on screening tests often draw controversy, but do doctors and their patients readily follow their guidelines? A new study suggests they might a little bit, at least for prostate cancer screening.

In 2008, the 16-member expert panel advised against prostate-specific antigen screening in men 75 and up, arguing that in older populations the tests did more harm than good. And that seems to have led to a small, if significant, drop in screenings rates for men in that age group.

In a research letter published online this week in Archives of Internal Medicine, doctors said the USPSTF's guidelines urging men 75 and older to skip the prostate cancer-screening blood tests reduced the number of men getting the tests by 2 percentage points, when compared to a younger cohort then still advised to get the screening. (In May, the USPSTF decided that all men, even those under 75, should avoid PSA screenings.)

"In this case, a recommendation to discontinue care had a significant impact," wrote the researchers, led by Dr. Joseph S. Ross at the Yale University School of Medicine in New Haven, Conn.

For the study, researchers gathered data from the SEER database on Medicare patients (and another on cancer-free Medicare patients), pulling up information on screening for a sample of men from 2007 to 2009. Next they crunched the numbers using what's called a quasiexperimental design. In this, investigators compare the before and after difference of the group getting the treatment with the before and after difference of a control group not getting the treatment. The point is to separate out universal trends that could otherwise skew the results.

In this study, that means the researchers first compared the percentage of men 75 and over screened from their sample from before the guidelines were released, from April 2007 to June 2008, to those screened after USPSTF published its recommendations, from October 2008 through December 2009 (the dates include a four-month lag to allow word of the USPSTF's guidelines, published in August, to get out). Then they compared this change to the one experienced by men aged 66 to 74, who were then still advised to get screened, after the guidelines were released.

According to the researchers, PSA screening rates in men 75 and above fell from 29.4 percent before the guidelines to 27.8 percent after, while for men in the 66-74 group they actually inched up from 33.9 percent to 34.4 percent, resulting in a differential decline of 2 percentage points for the older men after race and and other factors were controlled for. The researchers said the results applied equally to geographic areas with higher and lower PSA screening rates and with different densities of practicing urologists.

However, they did say there was more work to be done, as screening rates, if dropping, were still fairly high.