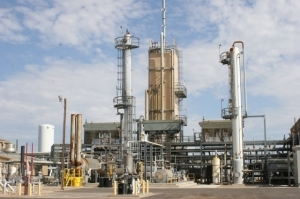 The Cliffside Crude Helium
Enrichment Unit (CHEU) provides
the BLM crude helium to private
industry, and supplies about 42
percent of the U.S. domestic
helium supply, and about 35
percent of the world’s helium.
From the September 2012 issue of HealthCare Business News magazine

In 2010, scientists cautioned Congress of an imminent helium crisis. The most commonly used inert element is tapping out at an alarming rate, experts warned, with the possibility of helium ceasing to exist in a useable form on our planet within the next 30 years.

The problem started sometime between WWI and WWII, when the U.S. decided to take raw helium from the Texas Panhandle and pump it back into the Bush Dome -- a far-reaching underground reservoir where almost a third of the world’s supply is contained. By 1995, the reserve was $1.4 billion in debt after a billion cubic meters of the gas had been utilized, prompting Congress to pass the 1996 Helium Privatization Act to sell off the Dome and its reserves by 2015, regardless of the market price. The act stipulated that the same amount of helium should be sold each year, whatever the global demand for it.

To deflate this issue and supplant the 1996 law, a Senate panel examined the Helium Stewardship Act of 2012 in May. This bill includes maintaining a steady 15-year supply of helium for federal users and research grant holders, also giving priority, in times of shortage, to federally funded researchers.

Until a final resolution is reached, the shortage is proving particularly difficult for those who work with magnetic resonance imaging (MRI) scanners – which are cooled by the liquid form of the gas. In a nutshell, sans a constant supply of helium, new MRI machines cannot be produced and current machines would eventually cease to function.

Maintenance disruptions and closures
In July, the Bureau of Land Management (BLM), which operates the federal helium program, had a planned outage that lasted almost two weeks. Unplanned and scheduled maintenance disruptions like this are common at the BLM. But with several plants simultaneously shutting down for maintenance over the past few months, there have been fewer resources available to go around.

“The Exxon Mobil shutdown (June through September) has contributed to the shortage of helium along with Riley Ridge being delayed and the BLM shutdown,” says Ellen Joyner, a product manager for the service portion of Siemens Healthcare’s MR business unit. “Exxon reduced supply by 20 percent during its shutdown period and BLM reduced supply by approximately 50 percent during its shutdown period. All helium suppliers are impacted.”

Further to this, Asian countries receive helium from plants in Algeria and Qatar, and lately those resources haven’t been operating at full capacity either, due to lack of energy for production.
1(current)
2
3
4
5