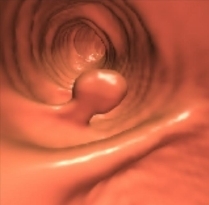 The Centers for Medicare and Medicaid Services shot down requests to cover virtual colonoscopies in 2009 citing, in part, a lack of evidence of the imaging technique for Medicare-aged patients. But a new study suggests it's as good at finding cancerous growths, and as safe, as it is in younger patients.

The study, published in the July issue of the American Journal of Roentgenology, examined records of 1,410 patients 65 years and up who underwent a screening or surveillance CT colonography -- that is, a CT scan of their gut to check for cancers or abnormal masses.

The researchers said they were able to address a handful of CMS' published concerns about extending nationwide coverage to CTCs -- lack of evidence of their effectiveness in seniors, worries about ionizing radiation dose from the scans, and fears that the discovery of large numbers of "extracolonic findings," or potentially medically significant growths outside the colon, would lead to a lot of costly follow-up diagnostic tests.

First, the authors of the retrospective study, conducted at the National Naval Medical Center in Bethesda, Md., said the referral rates, or percentage of patients referred to a traditional colonoscopy after a scan, were reasonably low. Using what is apparently a standard 6-millimeter polyp cutoff size for referral, researchers said 14.5 percent of patients were referred for traditional optical colonoscopies (or 198 out of 1,364 patients, after 46 were excluded because of involvement in another clinical trial).

This is similar to what has been found in CTC studies of younger patients, and also similar to the rate found by other researchers for the 65 and over population. Two other CTC studies cited by the authors found between 14 and 15 percent colonoscopy referral rates in Medicare-age patients. And a recently published secondary analysis of the ACRIN National CT colonography Trial, one of the biggest-ever studies of CTC, estimated a hypothetical referral rate, based on their data, of at most 12.6 percent for the 65 and overs.

In the current study, abnormal growths, or neoplasia, were found in 9.3 percent of patients, and advanced neoplasia in 3.3 percent of the group, according to the researchers. These were also similar to findings in younger patients.

Extracolonic findings, a big sticking-point among CMS and other CTC skeptics, were seen in only 2.9 percent of patients, comparable to findings in younger patient cohorts, the researchers said. Extracolonic findings were mainly seen in the guts, the vascular system or in the lungs and surrounding areas.
1(current)
2