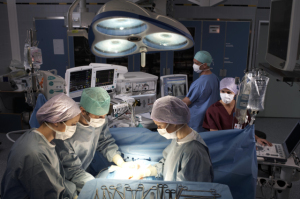 Anesthesia is now safer than ever. Over the past 25 years, anesthesia-related mortality rates have dramatically decreased from one death per 5,000 anesthetics administered, to one death per 200,000-300,000 anesthetics administered, according to the American Society of Anesthesiologists. In layman's terms: a person is 40 times more likely to be struck by lightning than they are to die from anesthesia.

Despite these improvements, as many as one in four patients postpone surgery due to lack of understanding and apprehension about anesthesia, according to the ASA’s Vital Health Report from 2010. And on its website, the National Institute of General Medical Sciences says that for elderly patients and those with certain chronic, systemic diseases like diabetes, general anesthetics are still among the most dangerous drugs used by doctors.

To counteract this, in October, the Anesthesia Quality Institute pioneered the Anesthesia Incident Reporting System, the first nationwide system that collects data including anesthesia-related issues from real, individual cases. As a means of improving patient safety, AQI aims to use this data to educate those in the industry and identify emerging trends in anesthesia patient safety, including the introduction of new drugs or devices.

Anesthesia’s device market: Companies battle for market share
Between 2009 and 2010, the value of the U.S. anesthesia, respiratory and sleep-management device market increased 3.7 percent to more than $2.5 billion. Fueled by anesthesia information management system sales, the overall market is estimated to grow at a midlevel, single-digit rate, reaching $4 billion by 2017, according to iData Research’s May report, “U.S. Market for Anesthesia, Respiratory and Sleep Management Devices.”

But emptier wallets are driving providers to demand more cost-effective products. An increasing number of sicker patients are being admitted to the hospital, placing a greater strain on health care resources, according to Kelly Barritt, senior market analyst in clinical care for research group InMedica.

“Following from the economic recession, clinicians are starting to make more informed purchasing decisions to ensure they get the best return on investment; demand for anesthesia devices is expected to decrease as a consequence,” she explains.

The anesthesia delivery unit market, in particular, is also getting more competitive. Picis, GE Healthcare, Draeger, IMDsoft, Merge and Philips are now releasing low-cost, low-acuity models to compete with Mindray Medical International Ltd., MAQUET and Penlon and other firms that have recently entered the market. Unit sales are forecasted to increase through 2017 as a result of these lower cost devices coming out, adds iData’s report.
1(current)
2
3
4
5