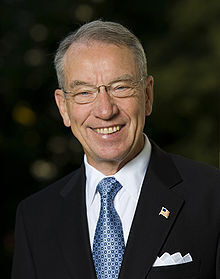 Sen. Chuck Grassley
A trio of lawmakers are asking a federal office why it has taken so long to review a stalled medical device tracking rule.

Senators Herb Kohl (D-Wis.), Chuck Grassley (R-Iowa) and Richard Blumenthal (D-Conn.) wrote to Jeffrey Zients, acting director of the Office of Management and Budget, asking him to explain why it has taken so long to act on a proposed rule submitted by the Food and Drug Administration in July. In general, the OMB has 90 days to review a rule or request a 30-day extension, the lawmakers said.

The proposed rule, called for by 2007 legislation, would create a Unique Device Identifier to enable providers to better keep track of devices. The senators said that a UDI system, used in conjunction with electronic health records, would help close "gaps" in the follow-up and surveillance of medical devices after they're cleared for the market by the FDA.

"We introduced the bipartisan Medical Device Patient Safety Act (S.1995), which is aimed at bolstering and improving post-market safety of medical devices and as such, we are fully committed to ensuring that FDA has the data it needs to protect the public health," the senators wrote in their letter, dated Feb. 9.

Their device safety bill was introduced on Dec. 14, and is now in committee, according to GovTrack.