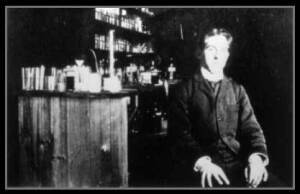 From the January 2012 issue of HealthCare Business News magazine

The Radiological Society of North America’s annual conference in Chicago only recently concluded. So it seems fitting to cover Dr. Emil Herman Grubbe – one of the earliest radiation therapy specialists in that city and perhaps the United States. But what would make the tenacious doctor’s career would inevitably polish him off, rendering Grubbe one of manmade radiation’s first victims.

Born January 1875 to German immigrants in the Windy City, our protagonist breezed into employment as an office boy at Marshall Field’s department store in 1888. Spurred on by his boss, Grubbe pursued his passion for science and medicine and at age 15 started trudging down his fateful career path as a physician. He attended the Hahnemann Medical College of Chicago, where he taught chemistry and studied medicine, but it was while moonlighting as a factory worker on Halsted Street that Grubbe began experimenting with Crookes tubes and coils.

Often exposing the bare flesh of his fingers and face to the tubes, his skin and nails began peeling, with mysterious blisters and tumors promptly materializing on his hand and neck. Around the same time, Wilhelm Röntgen’s discovery of the X-ray in November 1895 swiftly cracked the case.

"I knew then I had been burned by X-rays," said Grubbe. "They were produced in the Crookes tubes. From that day on I protected myself from the rays. But it was too late.”

In early 1896, the 21-year-old doctor’s professor, Dr. Reuben Ludlam, theorized that because radiation breeds tumors, it might also alleviate them — coinciding with one of homeopathic medicine’s basic premises that small doses can help mend symptoms that large doses induce. With this information and an improvised X-ray tube in tow, Grubbe began treating Rose Lee, an elderly patient suffering from breast cancer that had relapsed post-mastectomy – her tumor had mushroomed into an agonizing mass in her breast.

Although he would later become the first to use lead as protection against radiation exposure, in this particular instance, Grubbe fashioned a makeshift X-ray shield from tinfoil found at the bottom of a Chinese tea box to cover the rest of Lee’s chest. For 18 consecutive evenings, he irradiated her cancer, resulting in the ulcerating, tightening and shrinking of Lee’s tumor – this was the first documented local response in X-ray therapy’s history. This recovery, however, was short-lived. Three months after initial treatment, the cancer returned with a vengeance and Lee succumbed to it. From this, Grubbe ascertained that X-rays could only be utilized to treat local tumors, signifying the birth of radiation oncology.
1(current)
2