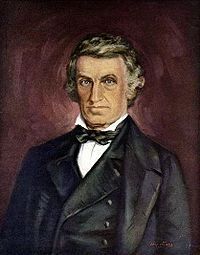 For centuries, the process of gastric digestion puzzled doctors and scientists far and wide. Many hungered for the ability to open a door and peek into a live human stomach, observing digestion as it happened. But one man, Dr. William Beaumont, literally snagged the seemingly far-fetched opportunity, securing the coveted place in history as father of gastric physiology.

Commenting on 18th century physiologists of his day, the Scottish anatomist and physician Dr. William Hunter lectured, “…to account for digestion, some [physiologists] have made the stomach a mill; some would have it to be a stewing pot; and some a wort-trough. Yet, all the while, one would have thought that it must have been very evident that the stomach was neither a mill; nor a stewing pot; nor a wort-trough; nor anything but a stomach.”

Enter the stomach that would go down in history, in a fortunately unfortunate turn of events. On June 6, 1822, the famed stomach, belonging to 28-year-old Alexis St. Martin -- a French Canadian voyageur and fur trader – sustained an accidental duck shot, after which he lay dying on the floor of his workplace, the American Fur Company on Mackinac Island in Michigan's Lake Huron.

Rushing to his side was Beaumont, a U.S. Army surgeon serving at nearby Fort Mackinac. Although he predicted St. Martin would survive no more than 36 hours and noted that he “considered any attempt to save [St. Martin’s] life entirely useless," Beaumont treated the musket wound, restoring his patient back to health. At this point, the two men would have gone their separate ways, but as St. Martin’s wound healed, it left behind a hole large enough to insert an entire forefinger into his stomach’s cavity. Aside from the open gastric fistula, St. Martin’s health was top-notch; he simply plugged up the hole with a piece of cloth and got on with his day. This was the first time such a perfect, long-term recovery had occurred with a permanent stomach opening.

An opportunistic Beaumont did not hesitate to take advantage of this unique situation. In 1825, he allegedly tricked the illiterate St. Martin into signing a contract permitting him to execute experiments on the poor fellow’s stomach. The U.S. Army supported Beaumont’s research, making him a sergeant and upping his salary to ease the physician’s financial burden. Beaumont also paid St. Martin to work as a handyman for him on the side.

For nearly eleven years after St. Martin’s accident, Beaumont continued to observe his patient intermittently and brought him along to various Army posts with him, including Fort Niagara, N.Y. and Fort Crawford, Wis. Later, he used a six-month leave of absence to take St. Martin to Washington, D.C. for an extensive series of experiments.
1(current)
2
3