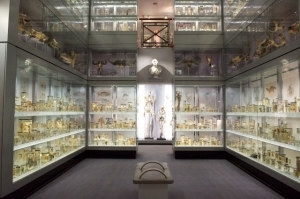 © The Hunterian Museum at
the Royal College of Surgeons
It's hard to believe idiosyncratic fictional characters like Dr. Dolittle and Dr. Jekyll and Mr. Hyde were actually inspired by one of the most influential scientists and surgeons of his day -- John Hunter.

When 65-year-old Hunter died of a heart attack in October 1793, he left behind a legacy; his contributions to medical science include the first complete study of child development, human teeth (he coined the terms "incisors" and "molar"), gunshot wounds and the lymphatic system. Hunter's Treatise on the Blood, Inflammation, and Gunshot Wounds is his most important work and his most notable surgical advance was in the tying of the artery above the area of disease in aneurysm.

He was so dedicated to his cause, that he believed only tried and tested medical treatments and surgical procedures should be introduced into practice -- even at his own risk. According to Dr. Charles "Carl" Hoffman, Library of the History of Medical Sciences, Marshall University, Hunter possibly inoculated himself with venereal disease for research purposes. Upon accidentally rupturing his Achilles tendon, Hunter's study and repair of his own ailment led to the modern-day practice of cutting through tendons beneath skin to relieve distorted and contracted joints.

Acquiring mechanical skills from his humble origins as a cabinetmaker in Scotland, Hunter succeeded beyond expectations when assisting his brother William in his dissection room at his London-based anatomy school - the first school to let young surgeons and medical students dissect human corpses. Incidentally, the school was able to succeed due to the fresh supply of dead bodies Hunter obtained from grave robbers.

He attended Chelsea Hospital and was appointed one of the masters of anatomy of the Surgeon's Corporation. Later, Hunter was house surgeon at St. George's Hospital. His experience made him one of the wealthiest, most popular surgeons in London and he treated celebrities of his day, including William Pitt, David Hume, Adam Smith and Lord Byron. In 1783, the Royal Society of Medicine and the Royal Academy of Surgery of Paris elected Hunter as a member for his research as a naturalist.

Today, the Hunterian Museum at the Royal College of Surgeons in London boasts Hunter's collection of over 14,000 preparations of 500 species of animals and plants, along with drawings, oil paintings and casts illustrating disease. Hunter spent his life dissecting anything and everything from bees to people to elephants to whales and was often seen leading bulls and leopards into his London home for study. The most expensive item in his museum is the skeleton of Charles Byrne, the "Irish Giant", standing seven feet seven inches tall.

Although many, including Sir James Paget, celebrate Hunter as a hero and "the founder of scientific surgery", research published last year in the Journal of the Royal Society of Medicine alleges Hunter helped his brother William murder pregnant women to study their corpses.

Potential seedy methods aside, Hunter's pioneering technique of applying science to surgery and the influence of his study directed attention to disease and repair processes -- the basis of modern surgical practice.

The Hunterian Museum is free to visit and is open Tuesday to Saturday, 10am to 5pm. For more information, go to: www.hunterianmuseum.org.