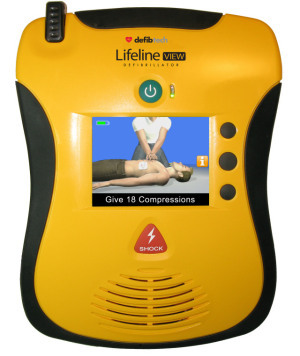 Alerted by a group of students, the school nurse rushed to the gym to find Seale with no pulse. She started cardiopulmonary resuscitation and asked someone to get the automatic external defibrillator, hanging in a wall-mounted case in the hallway.

The two shocks delivered by the AED ended up snatching Seale from the jaws of death. Data collected by the defibrillator later helped a cardiologist determine that she has long QT syndrome, a heart rhythm disorder.

Thanks to the AED, Seale avoided becoming one of the nearly 300,000 Americans who die every year due to sudden cardiac arrest, according to the Sudden Cardiac Arrest Association.

After the incident, Seale told the Star-Telegram that the AED is “pretty dummy-proof,” simply requiring a rescuer to push a big button and stand clear as the shock is delivered.

The devices were once significantly more complicated and could only be used by trained medical professionals. Fortunately, the technology has come a long way. Today, an AED can be used by practically anyone and can be found anywhere from a casino to a health club.

And the simplicity of the device is key -- time is precious when administering aid to someone suffering from AED. If defibrillated within the first minute of collapse, the chances that a person will survive are close to 90 percent. For every minute that a shock isn’t delivered, the survival rate drops by 7 to 10 percent, according to the SCAA.

AEDs are quickly becoming the standard of care in the public sector, and manufacturers are making sure the devices are as user-friendly as possible. More recently, companies have also placed a bigger emphasis on the role of AEDs in the facilitation of the entire resuscitation process.

Coaching CPR
Every five years, the American Heart Association relies on the latest research to issue an updated version of its Guidelines for CPR and ECC. The most recent AHA guidelines came out in 2010.

One of the key highlights from the association’s recommendations is the strong and continuous emphasis on high-quality CPR.

For example, Zoll Medical Corporation utilizes the Real CPR Help technology on their devices. “It’s a system that measures the depth of chest compression when doing CPR and provides a rescuer with feedback on whether they’re doing the right depth or not,” explains Ward Hamilton, the company’s vice president of marketing.
1(current)
2
3
4
5