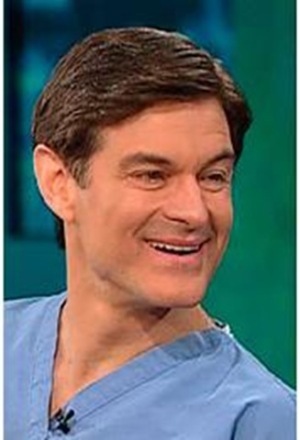 Dr. Oz has
influence: his show
averaged around
3 million viewers
last week.
The American College of Radiology is reassuring women that there's little evidence they need a thyroid guard when getting a mammogram after a popular television show linked ionizing radiation exposure from the exam to rising rates of thyroid cancer.

"This concern simply is not supported in scientific literature," the ACR said in a statement posted on its website this week.

The society said it has received calls, mainly from radiologic technologists, who said women have been showing up for their mammogram requesting thyroid shields. It turns out the women's concerns likely stem from a 2010 episode of the popular syndicated health advice program, "The Dr. Oz Show," which was recently re-broadcast.

"As far as we know, they re-ran the episode about a month ago," Heather Curry, a spokeswoman for ACR, told DOTmed News. "That's why we've seen this recent explosion."

During the episode of his top-rated show, which aired in September, Oprah Winfrey protégé and heart surgeon Dr. Mehmet Oz suggested that the rise in thyroid cancer diagnoses began "just as X-ray radiation was being routinely used to diagnose and treat disease."

"Although routine dental X-rays, chest X-rays and mammograms of today use much lower and safer amounts of radiation, some worry about this as a thyroid-damaging source," reads an article on Dr. Oz's site posted Sept. 27. "Some professionals say to protect the thyroid people should wear a lead thyroid shield (and apron when possible) when undergoing these procedures [to] block radiation reaching the thyroid gland, and to limit tests using X-rays to those that are absolutely necessary."

But ACR said as far as current scientific knowledge goes, the real risks are thought to be negligible. During a mammogram, the thyroid is not exposed to the direct X-ray beam and only receives scattered X-rays of less than 0.005 milligrays. This is the same dose a person receives from 30 minutes of natural background radiation. For the annual screening mammography population (women 40 to 80 years old), this tiny dose could translate into cancer risks for about one out of 17 million women screened, the group said.

The estimated risk also falls rapidly with age. For a typical bilateral 2-view mammogram of a 40-year-old woman, the lifetime risk of the mammogram causing thyroid cancer is one in 158 million. For a 70-year-old woman, the risk drops to less than one in 740 billion, according to a note from R. Edward Hendrick, clinical professor of radiology with University of Colorado in Denver, on the ACR site.
1(current)
2